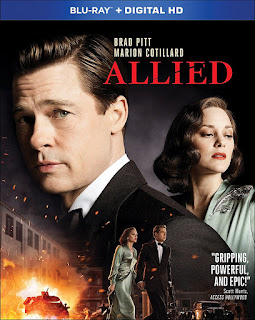 Remember 80s and 90s when Robert Zemeckis was nearly synonymous with conceptually ambitious "event" pictures? Some were groundbreaking technical achievements for their time, others simply had massive audience appeal. A few, like Who Framed Roger Rabbit and Forrest Gump, were blessed with both. Regardless of the film, Zemeckis had a Spielbergian knack for marrying astounding visuals with terrific characters and compelling narratives.

That was a long time ago. It looks now like Zemeckis is more interested in adult-oriented drama than blockbusters. While he's more-than-earned that right, he's experiencing some growing pains, much like Spielberg during his Empire of the Sun and Always days. Case-in-point, Allied is, as one would expect, technically brilliant, and Zemeckis manages to capture many potentially-mundane scenes in a way we haven't seen before (certainly one of his trademarks). But sometimes his sensibilities aren't what a film like this needs.

Brad Pitt plays Max Vatan, a Canadian spy working for British Intelligence during World War II, who teams up with a member of the French Resistance, Marianne Beausejour (Marion Cotillard), to assassinate a German ambassador in Casablanca. While undercover as husband and wife, they fall in love for real. After their mission is complete, the two return to England to marry and raise a family.

Fast-forward a year; Max now serves the British from behind a desk while Marianne looks after their daughter, Anna. Aside from the occasional German air-raids, things are idyllic until Max is informed by his commanding officers that Marianne is suspected of being a German spy. They plan on baiting her with false intelligence (a 'blue dye' operation), and if what they suspect turns out to be true, Max is ordered to kill her himself. Max refuses to believe it and sets out to prove Marianne is who she says she is, which includes going back into German-occupied territory.

Touted as a romantic thriller, Allied is sometimes quite thrilling indeed, particularly the initial assassination mission. Later, as the story begins to unfold, the film does a good job making the audience wonder whether or not Marianne is in cahoots with the enemy. As for the romance...Pitt & Cotillard are certainly an attractive couple and deliver earnest performances, but they go from zero to madly in love with very little transition. Afterwards, their relationship doesn't really gel like, say, Rick and Ilsa's in Casablanca (an obvious inspiration), no matter how often they hop between the sheets. This threatens to dampen any emotional payoff the viewer is expecting.

Then again, emotional resonance was never really Zemeckis' strongest suit. Allied works best when he's clearly in his element, meaning the film is visually arresting, with a few jaw-dropping sequences (such as a German bomber crash in the center of London). And the story itself is actually pretty interesting, which Zemeckis punctuates with some expertly executed (and violent) action scenes.

So while Allied isn't quite the emotionally-charged epic it wants to be, it's an entertaining enough thriller to maintain interest for two hours. It doesn't rank among Zemeckis' crowning achievements, though compared with his more recent adult-oriented fare, this film is much better than the inexplicably overpraised Flight. Bottom line...Allied is worth a watch for spy thriller fans, less so for those seeking sweeping romance.

EXTRA KIBBLES:
FEATURETTES (all titles are pretty self-explanatory): "The Story of Allied"; "From Stages to Sahara: The Production Design of Allied"; "Through the Lens: Directing with Robert Zemeckis"; "A Stitch in Time: The Costumes of Allied"; "'Till Death Do Us Part: Max and Marianne"; "Guys and Gals: The Ensemble Cast"; "Light, Pixels, Action! The Visual Effects of Allied"; "Behind the Wheel: The Vehicles of Allied"; "Locked and Loaded: The Weapons of Allied"; "The Swingin' Sound: The Music of Allied"
DIGITAL COPY
KITTY CONSENSUS: