MVD Entertainment Group furthers the distribution of Arrow Video in the US with three new titles to kick off 2017. 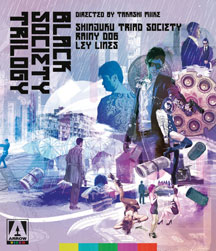 January's a great month for fans of Japanese crime cinema as Takashi Miike's Black Society Trilogy arrives on both Blu-ray and DVD. These stylish and gripping crime films put Miike on the cinematic map and proved he was more than just a specialist in blood and guts. See the films that made Takashi Miike's name as a master of Japanese crime cinema with this exciting set from Arrow Video. Including Shinjuku Triad Society, Rainy Dog and Ley Lines, in beautiful high definition transfers, the set also contains a host of special features including a brand new interview with the director himself. 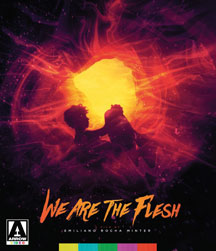 Fresh from recent festival and filmmaker acclaim, We Are the Flesh debuts in the US on DVD and Blu-ray. We Are the Flesh is a Mexican arthouse head-trip which takes you on a nightmarish journey into a post-apocalyptic hell. Outrageous and explicit, it sees a brother and sister taken in by a strange hermit who uses them as he acts out his own depraved fantasies. The longer they stay, the more they find themselves slipping into the darkness, despite their better judgement.

This bizarre slice of Mexican arthouse is one of the most unsettling film experiences you will ever have and an all-out psychedelic head-trip. It details the adventures of a brother and sister who take refuge with a strange hermit in a post-apocalyptic city. As he acts out his dark, depraved fantasies, they find themselves drifting further into the realms of the forbidden. 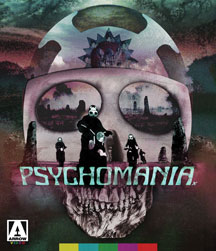 Last but not least, The United States gave motorcycle-mad cinemagoers Easy Rider, The Wild One and The Wild Angels. The United Kingdom gave them Psychomania, the tale of zombie bikers run amok is southern England, coming to Dual Format DVD + Blu-ray on February  21. The Living Dead are a delinquent biker gang, fond of causing havoc on British roadways and making out in graveyards. Gang leader Tom (Nicky Henson) also has a Satanist for a mother, and when he discovers the secret of immortality, the name of his motley crew takes on a more literal meaning. Psychomania is a wonderfully offbeat gem, outlandish and eccentric in equal measure.
Posted by D.M. Anderson at 9:41 AM