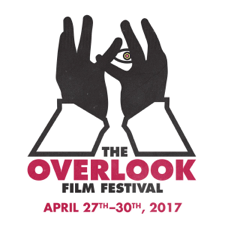 THE OVERLOOK FILM FESTIVAL
BRAND NEW GENRE FEST IN MT.HOOD, OREGON TO LAUNCH ON APRIL 27, 2017
A 4-day celebration at horror's most iconic hotel

(Los Angeles, October 31, 2016) – The Overlook Film Festival, a four-day celebration at horror’s most iconic hotel The Timberline Lodge – the hotel used as the exterior setting of the infamous Overlook Hotel in Stanley Kubrick’s masterpiece THE SHINING - will kickoff for the first time from April 27 through April 30, 2017. The festivity is expected to showcase experiential events, exciting work in new and classic horror cinema, and interactive activities where attendees can be fully immersed in the diverse world of the genre space. Located just one hour east of Portland, Oregon, The Overlook Film Festival will attract genre fans and cinephiles from all over the world along with major press and industry members who are excited for this unique experience.

The annual four-day celebration is created by veteran festival organizers Michael Lerman and Landon Zakheim, both sharing a passion and a vision for providing a rare experience for fans to not just watch the latest work from emerging genre filmmakers but to also connect with each other in order to foster a creative and engaging community.  The duo plan to bring their signature events to the festival, including a full weekend long immersive game from interactive company Bottleneck Immersive and an original live version of radio play “Tales From Beyond The Pale” by Glass Eye Pix.

"We're incredibly excited to bring the film community and enthusiastic audiences we've been cultivating over the last few years to The Overlook Film Festival" said festival co-director Landon Zakheim. "We're so grateful to the Timberline Lodge for providing such a gorgeous iconic venue in the beautiful location of Mt. Hood, Oregon where our unique, experiential celebration of all things genre can thrive."

"It's a truly inspiring time for horror cinema," said festival co-director Michael Lerman. "Our jam-packed program of festival favorites, fresh discoveries and bonafide classics from features to shorts to live events will be presented in the one-of-a-kind atmosphere we've built through our various other genre projects. We really can't wait to announce our lineup next year."

Film Submissions are now open until February 3rd, 2017. For more information, please visit www.overlookfilmfest.com.
Posted by D.M. Anderson at 10:43 AM

ON BLU-RAY 7/7 FROM CRITERION COLLECTION

WHAT SHE SAID: THE ART OF PAULINE KAEL on DVD & Digital 6/16