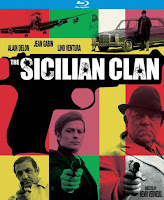 International superstars Alain Delon (Le Samouraï), Jean Gabin (Touchez Pas au Grisbi) and Lino Ventura (Le Deuxième Souffle) star in this action-packed thriller that delivers white-knuckle suspense from its exciting opening chase to its thrilling conclusion. Aging Sicilian mobster Vittorio Manalese (Gabin) springs master thief and hit man Roger Sartet (Delon) from prison so he can help him pull off the most ambitious heist of his illustrious career, which includes hijacking a New York-bound plane and transporting 50 million dollars in jewels. But after the audacious crime, Sartet betrays the crime boss and the two partners in crime become engaged in a tense game of cat-and-mouse and a no-holds-barred battle of wit and bravado. Wonderfully directed by Henri Verneuil (Any Number Can Win), who also co-wrote the screenplay with José Giovanni (Classe Tous Risques) and Pierre Pelegri (The Last Adventure), based on a novel by Auguste Le Breton (Rififi, Bob le Flambeur). Two of the film's other best features are the stunning cinematography by Henri Decaë (Le Cercle Rouge) and original musical score by the legendary Ennio Morricone (The Good, the Bad and the Ugly). 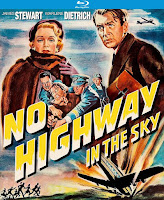 Screen legends James Stewart (Broken Arrow) and Marlene Dietrich (Witness for the Prosecution) go behind the scenes of commercial aviation in this gripping, suspense- filled classic about one man's fight to prevent disaster in the air. An eccentric scientist (Stewart) has no proof, but is convinced that England's new Reindeer planes will fall apart after 1,440 hours of flying time. When he finds himself on a Reindeer that is about to reach that stress point, his frantic warning rings true for a famous actress passenger (Dietrich) and a flight attendant (Glynis Johns, The Court Jester) who later supports his drastic action to permanently ground the aircraft. Henry Koster (Harvey) directed this suspenseful thriller based on a novel by Nevil Shute (On the Beach), with a screenplay by R.C. Sherriff (Odd Man Out), Oscar Millard (Angel Face) and Alec Coppel (Vertigo). The stellar cast includes Jack Hawkins (The Bridge on the River Kwai), Janette Scott (The Day of the Triffids), Elizabeth Allan (A Tale of Two Cities) and Kenneth More (A Night to Remember). 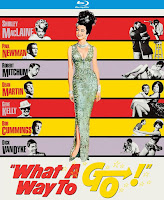 All Louisa May Foster (Shirley MacLaine, Two for the Seesaw) wants is a man to love and grow old with. But she keeps meeting and marrying men with a desire to strike it rich and a habit of dying soon thereafter. A spectacular lineup of Hollywood's legendary stars appeared in this delightful and romantic camp comedy, including Paul Newman (Paris Blues), Robert Mitchum (Man with the Gun), Gene Kelly (An American in Paris), Dean Martin (The Silencers), Dick Van Dyke (Mary Poppins) and Robert Cummings (The Chase). J. Lee Thompson (Kings of the Sun) directed this colorful comedy that is pure delight from beginning to its all-too-soon ending.  What a Way to Go! was nominated for two Academy Awards including Costume Design for Edith Head's gowns worn by lovely Miss MacLaine and Moss Mabry's men's wardrobe worn by the legendary male leads. Shot in glorious Cinemascope by iconic cinematographer Leon Shamroy (Prince of Foxes, Daddy Long Legs).

In this vivid view of prehistoric life, a man from the vicious Rock People, Tumak (John Richardson, Black Sunday) is banished from his home, but soon finds himself living among the kind, gentle Shell People. There, he falls in love with the beautiful Loana (Raquel Welch, 100 Rifles, Fuzz, Fathom), in the role that made her an international sex symbol and a major star. The two decide to strike out on their own, living by their wits in a deadly land of treacherous beasts and unknown dangers, leading to a thrilling climax by the edge of an angry volcano. The stunning primeval creatures were created by the legendary special effects wizard Ray Harryhausen (The Beast from 20,000 Fathoms). One Million Years B.C., a true science-fiction classic, was directed by Don Chaffey (Jason and the Argonauts) and featured a strong supporting cast that included Martine Beswick (Thunderball), Robert Brown (The Living Daylights), Percy Herbert (Too Late the Hero) and Yvonne Horner (Prehistoric Women). The 100-minute international cut and the 91-minute U.S. cut are both included on this Blu-ray. 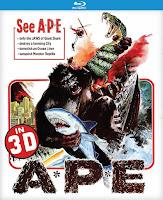 A freighter peacefully glides along the still waters of a soft Pacific night; their cargo: a recently-captured 36-foot ape. A giant fist comes up through the deck sending the sailors sprawling, and in a matter of seconds, the A*P*E (Attacking Primate monster) is loose! After battling a very large snake and a giant white shark, A*P*E defies the JAWS of the great white and is the victor. Joanna Kerns (TV's Growing Pains) arrives in South Korea to appear in a film. At the same time, A*P*E has also arrived and lays waste to the city of Inchon and continues his march forward, destroying everything in his path. Paul Leder (I Dismember Mama) co-wrote and directed this cult classic that needs to be seen to be believed. Co-starring Hollywood veteran Alex Nicol (The Man from Laramie, The Screaming Skull), A*P*E is presented in both 2-D and 3-D formats (3-D viewing requires a compatible television and Blu-ray player).
Posted by D.M. Anderson at 10:05 PM