CAPTAIN MARVEL Now on Digital / 4K, Blu-ray, DVD 6/11
Discover deleted scenes and over an hour of bonus content when you bring home Marvel Studios' CAPTAIN MARVEL on Digital. The in home release includes featurettes that highlight the transformative journey of Brie Larson (Captain Marvel) and her character’s impact on audiences around the globe; the influence of Nick Fury (Samuel L. Jackson) on significant events within the MCU; the perfect pairing of directors Anna Boden & Ryan Fleck; the ongoing conflict between the Skrulls and the Kree; and the raw talent behind the fetching feline named Goose. Viewers also gain access to six deleted scenes, director commentary, a gag reel loaded with funnies, flubs and Flerkens, and 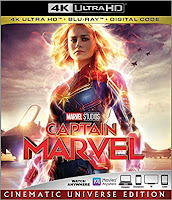 never-before-seen concept art and production photography. Viewers can bring home the film two weeks early on Digital 4K Ultra HD, HD and SD and gain access to two exclusive features, including a behind-the-scenes visit with the Visual Effects team that makes the filmmakers’ visions of the MCU come to life and an inside look at the epic team effort that goes into an action-packed sequence within a Marvel Studios film. A physical copy of “Captain Marvel” will be available as either a 4K Cinematic Universe Edition (4K UHD+Blu-ray+Digital Copy) or a Multi-Screen Edition (Blu-ray+Digital Copy), granting fans the flexibility to watch on devices of their choice. 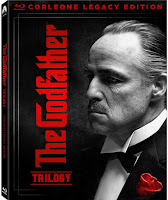 THE GODFATHER TRILOGY: CORLEONE LEGACY EDITION Coming 6/11
The Godfather Trilogy is the benchmark for all cinematic storytelling. Francis Ford Coppola’s masterful adaptation of Mario Puzo’s novel chronicles the rise and fall of the Corleone family in this celebrated epic. Collectively nominated for a staggering 29 Academy Awards, the films are the winner of 9, including 2 for Best Picture for The Godfather and The Godfather Part II. To this day, the saga is rightfully viewed as one of the greatest in the history of motion pictures. Now, for true cinema lovers, comes The Godfather Trilogy, with the Corleone Legacy Family Tree, Original Theatrical Art Cards, and Collectible Portraits with Frame to complete every fan’s collection. 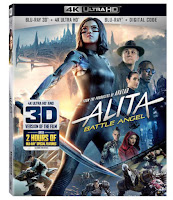 ALITA: BATTLE ANGEL on 4K, Blu-ray, DVD 7/23
From Academy Award winners James Cameron & Jon Landau, and visionary filmmaker Robert Rodriguez comes ALITA: BATTLE ANGEL, an epic adventure of hope and empowerment. When Alita (Rosa Salazar) awakens with no memory of who she is in a future world she does not recognize, she is taken in by Ido (Christoph Waltz), a compassionate doctor who realizes that somewhere in this discarded cyborg shell is the heart and soul of a young woman with an extraordinary past. When deadly and corrupt forces come after Alita, she discovers a clue to her past - she has unique fighting abilities that those in power will stop at nothing to control. If she can stay out of their grasp, she could be the key to saving her friends, her family and the world she's grown to love. 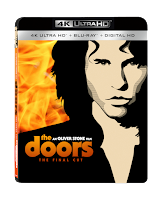 THE DOORS:THE FINAL CUT 4K Ultra Coming 7/23
In 1991, Oliver Stone crafted a psychedelic and powerful musical portrait that brilliantly captured the furious energy of the ‘60s and the myth of The Doors’ iconic front man, Jim Morrison - the man whose music shaped an era. Two decades later, Lionsgate presents a stunning new 4K restoration — The Doors: The Final Cut — supervised by Oliver Stone and brought to life with Dolby Vision and Dolby Atmos, which will take audiences back in time, into the world and sound of the psychedelic ‘60s. Relive Val Kilmer’s hypnotic performance as the legendary Jim Morrison, alongside stellar performances from Meg Ryan, Kevin Dillon, and Kyle MacLachlan, who tell the story of The Doors’ humble beginnings in Los Angeles to the height of their popularity. “This brand-new 4K restoration of The Doors in Dolby Atmos will provide far greater overall clarity and dimension for the audience. During the many concert sequences, the sound now fills the auditorium above the audience, behind it, and all points in between. I wanted the film to be as immersive as possible to a real ‘60s Doors experience,” said director Oliver Stone. “Additionally, I’ve made one cut of three minutes to a scene I thought was superfluous to the ending, which helps close out the film in a more powerful way.”

US on Digital 6/4 and on 4K, Blu-ray, DVD and On Demand 6/18
Academy Award winner Jordan Peele follows the success of his blockbuster hit, GET OUT, with the masterfully executed and viscerally terrifying US. Fans around the world can now untether the truth with more than 50 minutes of bonus features delving deep into the mind of Jordan Peele, his filmmaking process and the symbolism behind US. Featuring incredible must-see performances from Academy Award winner Lupita Nyong’o (Black Panther, 12 Years a Slave), Winston Duke (Black Panther), Emmy winner Elisabeth Moss (“The Handmaid’s Tale,” “Mad Men”) and Tim Heidecker (The Comedy, “Tim & Eric’s Bedtime Stories”), US is “the most out-of-the-box horror film of the past decade,” (Nathaniel Brail, Heroic Hollywood). Movie enthusiasts and horror fans alike can watch US again and again to unravel its darkest secrets.
Posted by D.M. Anderson at 1:41 PM