CRAWL in Theaters July 19
At FREE KITTENS MOVIE GUIDE, our two favorite genres have always been disaster movies and horror where animals attack people. Paramount’s upcoming thriller, Crawl, is both! This one is our Avengers Endgame, so it’s safe to say we’ll be there opening night. Director Alexandra Aja has made some good horror films in the past (Mirrors, Piranha 3D, The Hills Have Eyes), so this has the potential to be a gruesomely good time.

THAT WAY MADNESS LIES on DVD
An important film about somebody we at FREE KITTENS once knew. What do you do when your brother descends into a black hole of mental instability - starting with falling for a Nigerian email scam but eventually winding up involuntary committed into the hospital made famous by 'One Flew Over the Cuckoo's Nest'? Award-winning filmmaker Sandra Luckow unflinchingly turns her camera on her own family as they attempt to navigate the broken mental health system in an effort to save their brother, whose iPhone video diary ultimately becomes an unfiltered look at the mind of a man with untreated schizophrenia as well as an indictment of how the system failed. Available for rent or purchase on AMAZON and iTunes. 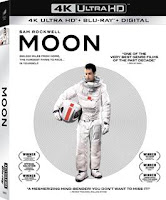 MOON launches onto 4K July 16
Commemorate the 50TH anniversary of the moon landing and the 10TH anniversary of a modern sci-fi classic when Duncan Jones’ MOON debuts on 4K Ultra HD and in 4K with HDR via participating Digital platforms from Sony Pictures Home Entertainment.  Oscar-winner Sam Rockwell (Best Supporting Actor 2017, Three Billboards Outside Ebbing, Missouri) stars as an astronaut miner extracting precious Helium 3 from the moon, a resource that promises to reverse Earth’s energy crisis .  As he nears the end of his three-year contract, he makes an ominous discovery… MOON is remastered in 4K with HDR and newly remixed with Dolby Atmos audio – both approved by Writer/Director Duncan Jones. The release also includes the original 5.1 theatrical audio mix. The all-new bonus material for the 4K Ultra HD release of MOON includes a retrospective conversation between Writer/Director Jones and entertainment journalist Joe Utichi, never-before-seen deleted scenes and a gallery of unique and compelling fan art posters, reflecting the film’s passion-driven cult status.  Also included are archival special features including two commentaries, Q&As and much more!
Posted by D.M. Anderson at 2:02 PM