Marvel Studios' CAPTAIN MARVEL on Digital May 28 and Blu-ray Collections June 11
Arriving home with extensive line-up of extras detailing the development of this highly anticipated addition to the Marvel Cinematic Universe (MCU), “Captain Marvel” includes Featurettes that highlight the transformative journey of Brie Larson (Captain Marvel) and her character’s impact on audiences around the globe; the influence of Nick Fury (Samuel L. Jackson) on significant events within the MCU; the perfect pairing of directors Anna Boden & Ryan Fleck; the ongoing conflict between the Skrulls and the Kree; and the raw talent behind the fetching feline named Goose. Viewers also gain access to six deleted scenes, director commentary, a gag reel loaded with funnies, flubs and Flerkens, and never-before-seen concept art and production photography.

IT CHAPTER TWO in Theaters This September 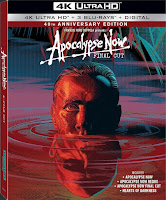 APOCALYPSE NOW FINAL CUT Coming to Theaters 8/15 and 4K Ultra Combo Pack 8/27
Restored from the original negative for the first time ever, Apocalypse Now Final Cut is Coppola’s most realized version of the film, which was nominated for eight Academy Awards. In addition to the restoration, this 4-disc Apocalypse Now Final Cut anniversary set also includes the film’s Theatrical Cut and Extended Cut (Redux), as well as the acclaimed Hearts of Darkness documentary. Loaded with hours of in-depth special features, the set will also feature the fascinating Tribeca Film Festival Q&A with Coppola and the prolific Steven Soderbergh (Sex, Lies, and Videotape), which has not been seen or heard outside of the festival until now, and newly discovered behind-the-scenes footage. The Apocalypse Now Final Cut 4K Ultra HD Combo Pack features new, collectable Mondo artwork.

Jordan Peele's US on Digital 6/4 and on 4K, Blu-ray, DVD and On Demand 6/18
Academy Award winner Jordan Peele follows the success of his blockbuster hit, GET OUT, with the masterfully executed and viscerally terrifying US. Fans around the world can now untether the truth with more than 50 minutes of bonus features delving deep into the mind of Jordan Peele, his filmmaking process and the symbolism behind US. Featuring incredible must-see performances from Academy Award winner Lupita Nyong’o (Black Panther, 12 Years a Slave), Winston Duke (Black Panther), Emmy winner Elisabeth Moss (“The Handmaid’s Tale,” “Mad Men”) and Tim Heidecker (The Comedy, “Tim & Eric’s Bedtime Stories”), US is “the most out-of-the-box horror film of the past decade,” (Nathaniel Brail, Heroic Hollywood). Movie enthusiasts and horror fans alike can watch US again and again to unravel its darkest secrets.

CRAWL in Theaters July 19
At FREE KITTENS MOVIE GUIDE, our two favorite genres have always been disaster movies and horror where animals attack people. Paramount’s upcoming thriller, Crawl, is both! This one is our Avengers Endgame, so it’s safe to say we’ll be there opening night. Director Alexandra Aja has made some good horror films in the past (Mirrors, Piranha 3D, The Hills Have Eyes), so this has the potential to be a gruesomely good time.
Posted by D.M. Anderson at 1:54 PM