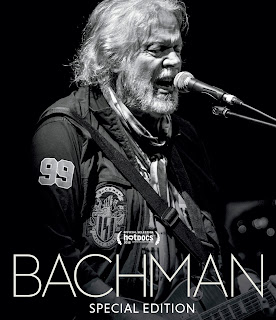 I generally don’t review many music-related videos unless, a) it’s a feature-length documentary, b) I actually like the artist’s music, or c) said-artist gives me the nostalgic warm fuzzies. In the case of Bachman, all three apply.

Randy Bachman was a founding member of The Guess Who and Bachman-Turner Overdrive, making him one of the few artists to reach #1 on the Billboard Charts with two bands from different eras. As for me, the latter’s third album, Not Fragile, was one of the first records I ever spent my hard-earned allowance money on, and I played it incessantly. So of course a documentary of the man’s life and career would be of great interest. Bachman turns out to be a mixed bag, though.

The film nicely encapsulates Randy Bachman’s entire life, from his Winnipeg upbringing to the present day, where he’s working on a George Harrison tribute album. Bachman himself is interviewed, as are family members, friends and colleagues (including Fred Turner, who co-founded BTO). For the most part, he comes across as a nice guy and is held in high regard by some of his contemporaries, including Neil Young, Peter Frampton and Rush’s Alex Lifeson. More importantly, we learn quite a bit about him personally that has never been widely documented, such a life of clean living and his conversion to Mormonism (traits generally atypical of rock stars).

As a career retrospective, however, it often falls short. Bachman’s time with The Guess Who and BTO are unarguably the high-points of his lengthy career, but we learn relatively little about his time in either band. In fact, his years with The Guess Who are summarized in about 15 minutes and some of the most enduring hits he wrote for the band aren’t even mentioned. Most of us know Bachman found even greater fame with Fred Turner and BTO a few years later, though the film doesn’t even acknowledge Randy’s two younger brothers in the band. Granted, the film is about Randy, but the viewer isn’t made aware he even had younger brothers. One can’t help but think these omissions might be intentional (lingering bad blood, perhaps?). Instead, much of the film focuses on his post-BTO career. While it’s nice that he seems to be in a good place, this chapter of his life isn’t nearly as compelling, unless, of course, one is curious about what he’s been up to since the hits dried up.

Bachman is a congenial tribute to an artist revered as a legend in his home country of Canada, with plenty of archival clips and testimonials from those who know him well. It’s fairly enjoyable, but those who grew up on The Guess Who or BTO might be disappointed in how little the film focuses on Bachman’s most interesting years.