LORDS OF CHAOS and the Methods of Mayhem 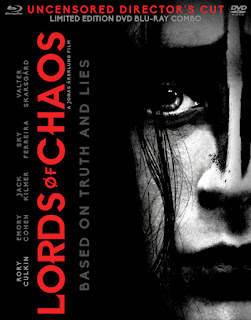 For the uninitiated, Mayhem is Norway’s most notorious black metal band. Though credited with being one of the genre’s earliest innovators, it’s the horrific actions and crimes of certain members in the early ‘90s that got the world’s attention. If you thought the off-stage antics of Motley Crue were extreme, Mayhem will redefine the word for you.

Being that the band’s reputation is far more interesting than their music, Lords of Chaos wisely focuses on the former. Self-mutilation, suicide, church burnings, suggested cannibalism and ultimately murder...this is the kind of stuff urban legends are made of. But while the film takes a lot of dramatic liberties with its characters and timeline, the acts of brutal violence associated with Mayhem are real, unflinchingly depicted in all their horrific glory.

Fledgling teenage guitarist Euronymous (Rory Culkin) is the film's (very) unreliable narrator, assuring us right away this story will end badly. He's Mayhem’s founder and de-facto leader of a small group of extreme metalheads that call themselves The Black Circle. These guys proudly profess their death-obsessed nihilism, anti-Christian ideals and open contempt for anyone deemed a poser. But despite going to sick extremes to demonstrate their credibility – both on and off stage – Euronymous is ultimately just promoting himself and the genre he repeatedly claims to have created.

Then he meets Varg Vikernes (Emory Cohen), who he first-dismisses as a poser. But Varg soon proves his worth through his own brand of black metal, which Euronymous records and releases to sell at his record store. Varg quickly embraces the black metal mantra to the extreme, engaging in increasingly dangerous criminal acts. It isn’t long before Euronymous feels threatened...not by Varg himself, but the attention his actions are getting from the media and the admiration from others in the Black Circle. Varg, in turn, grows resentful of Euronymous vicariously taking credit for everything they've done, from the church burnings to the murder of a gay man.

Much of the film deals with the escalating conflict between these two, leading to a tragic (?) conclusion. Neither of them seem to be playing with a full deck, but at least Euronymous has moments where he demonstrates small amounts of intelligence, compassion, even remorse. Varg, on the other hand, is one evil, maladjusted motherfucker. He’s also kind-of an idiot, making him even more dangerous. The viewer gets the impression Varg initially just wanted to fit in with the black metal crowd, but simply took the image to extremes.

Lords of Chaos is directed by Jonas Akerlund, a former black metal musician himself and the right guy for the job. He also recently directed Polar, which was all kinds of shitty. But here, his over-the-top approach is befitting of the subject matter. He pulls the viewer into this underground subculture with a knowing eye, and while we’re appalled by what he shows us, we’re so morbidly fascinated that we can’t look away. He also gets excellent performances from Culkin and Cohen (despite not sounding even remotely Norwegian). Where Akerlund struggles, however, is with the characters.

The film is certainly audacious, shockingly violent and even darkly humorous, but we ultimately learn very little about Euronymous or Varg beyond what’s already been well documented. Surely these two have backstories as interesting as their atrocities. If there was ever a movie that should have further-explored what makes its main characters tick, it’s this one.

But as it is, the story alone makes Lords of Chaos a luridly-compelling experience, perhaps even more-so for those unfamiliar with Mayhem’s dubious mark in heavy metal history. In fact, since the film isn’t really about the music, fans of the band or black metal in-general might be put-off at how derisively both are depicted. For everyone else with strong stomachs, get ready for a wild ride.

EXTRA KIBBLES
"11 DIRECTOR’S TEASERS” - Several brief promo spots, which could almost be considered a deleted scenes feature, since many consist of clips that are not in the final cut.
TRAILER
DVD COPY
KITTY CONSENSUS: