Blu-Ray Review: YOR, THE HUNTER FROM THE FUTURE 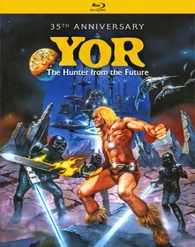 "YOOOOOOR!!!!!" the opening theme song cries out, evoking fleeting memories of Queen as the title flashes across the screen. Cheekily called "Yor's World," it ranks right up there with "Beware of the Blob" as one of the daffiest themes of all time. If that doesn't put a silly grin on your face, nothing will.

I suppose it helps if you're of a certain age, one who fondly recalls coming across titles like Yor, the Hunter from the Future at the local mom & pop video store. On the sci-fi/horror shelves, battered VHS boxes of titles you've never heard of far-outnumbered the blockbusters and classics. Most were made by earnest filmmakers of questionable talent who threw themselves on the flaming sword of good taste in vain efforts to create filet mignon on a peanut butter & jelly budget.

A surprising number of these would-be epics hailed from overseas, mostly Italy. Back then, there was nary a genre the Italians couldn't knock-off faster and cheaper. A few of 'em were so endearingly bad that they were embraced by enough fringe fans to become cult classics. So for some, this 35th Anniversary Blu-Ray release of Yor, the Hunter from the Future will be a glorious blast from the past (you know who you are).

Reb Brown - sporting a lioncloth, Garth Algar wig and two facial expressions (grim determination & an aw-shucks grin) - stars as the titular character, roaming an ancient wilderness on a quest to discover his origins. Along the way, Yor battles beasties, squares-off against blue-skinned cave-dwellers and saves a few grateful tribes of helpless idiots. He even finds time to swap spit with a couple of scantily clad barbarian babes (who fight each other for his affections...one of Yor's many high-camp highlights). This all happens before an advanced civilization led by The Overlord shows up, lasers blazing, to spoil the party.

But the party is just getting started. For the uninitiated, Yor must be seen to be believed, playing like an attempted mash-up of Conan the Barbarian and Flash Gordon (which might also explain the song). Nearly every aspect of the film - on both sides of the camera, including the music - is gloriously godawful. But unlike bad movies of today, which often wrap laziness & ineptitude in a shroud of self-awareness, we feel everyone involved was completely convinced they were truly making a great movie. They did do one thing right...casting Corinne Clery, who I could stare at all damn day.

If Yor aired on Netflix today, I doubt most newbies would make it through the opening credits before quitting. But in the VHS era (when Yor loomed large), we had to live with our viewing choices and were more willing to stick with 'em 'till the end. Revisiting the film decades later brings back fond memories of prowling video store shelves, choosing titles based on their cover and having a rollicking good time at a movie's expense. Those were great days and Yor is a great reminder.