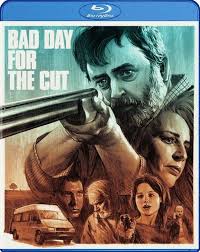 I had to look up the title's meaning. All I found was an article from The Irish News covering this film's Belfast premiere, which stated it's "an agri-slang expression for 'unbecoming weather'." That's certainly fitting, considering the cold, grey, dreary look of the Ireland locations.

The term might also apply to its grizzled protagonist, Donal (Nigel O'Neill), who's pretty-much a Gloomy Gus before his mom, Florence, is brutally murdered in her own home. After two thugs return to finish him off, Donal kills one and captures the other, Bartosz (Jozef Pawlowski), who was forced into trying to kill Donal by mobsters who have his sister (and turned her into a prostitute). With Bartosz in-tow, Donal goes on the offensive, heading to Belfast to avenge his mother and save Bartosz' sister. He also learns why they targeted his mom in the first place: Florence has a past he didn't know about, which connects her to vicious mob boss Frankie Pierce (Susan Lynch).

Bad Day for the Cut puts an interesting spin on the tried-and-true revenge tale with a lovably-gruff, fallible main character who doesn't seem to have a plan for anything beyond his next move. Donal is soft-spoken, sympathetic and emotionally vulnerable, though not averse to burning bad guys' scalps with a scalding pot 'o beans when pushed too far. We also get the impression he knows exacting revenge won't make him feel any better; it's simply something he feels duty-bound to accomplish.

Less effective are the plot revelations. Simply having Donal kill everybody one-by-one until no one's left would have been lazy & boring, but at the same time, overly-complicated story turns do make us a less invested in Donal's quest for vengeance. Not helping matters is Lynch as Pierce. She's a one-dimensional caricature from the get-go and Lynch's performance borders on scenery-chewing, in complete contrast to the tone and well-rounded characters writer-director Chris Baugh worked so hard to establish.

Still, Bad Day for the Cut is worth checking out. Moody, violent and occasionally very funny, it gives us a main character who's atypical of the revenge genre. The narrative backstory lessens the overall impact and the denouement is sort-of maddening, but until then, the film is fairly engaging.

On side note...some viewers may want to use the subtitle option for this one, as most of these characters have very thick accents and use a great deal of regional slang.