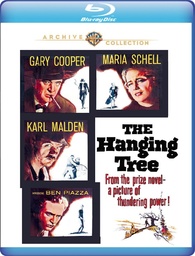 One of his less-renowned films in the genre, The Hanging Tree is noteworthy for being Gary Cooper's final western. Like most of his late career filmography, it's no High Noon, though it certainly plays to his strengths...which is essentially being Gary Cooper.

Joseph Frail is a doctor with a troubled past who sets-up shop in a grimy Montana gold mining town. When a would-be gold thief, Rune (Ben Piazza), is shot trying to get away from angry miner Frenchy (Karl Malden), Frail brings the young man to his place to treat his wound. Afterwards, Frail forces Rune into servitude, running errands and assisting with patients. Later, a woman named Elizabeth (Maria Schell) nearly dies from exposure after her stagecoach crashes. Frail nurses her back to health, but inexplicably keeps her sheltered from the rest of the townspeople. Elizabeth tries to get closer to Frail, only to be repeatedly refuted. Yet when she and Rune are finally free to prospect for gold on their own, he secretly funds their stake.

More of a character study of redemption than a traditional western, the narrative mostly focuses on Frail's ambiguous behavior. Through both Elizabeth and Rune, we slowly learn Frail's more than a simple doctor. Not only is he a former gunslinger, his tragic - or suspicious? - past reveals why he's so stubbornly overprotective of Elizabeth. The story itself isn't conducive to a lot of action, though the final act builds to exciting climax. While most of the cast is solid (perpetually-bland Piazza is a glaring exception), this is Cooper's show all the way. With his trademark quiet stoicism, he once again reminds us where Harrison Ford got all his best moves.

The Hanging Tree was a sizable hit when first released in 1959 - as was the theme song - but has been largely been overshadowed over the years by Cooper's genuine classics. Still, the film is an interesting look at a legend near the end of his career.
EXTRA KIBBLES
TRAILER
KITTY CONSENSUS: