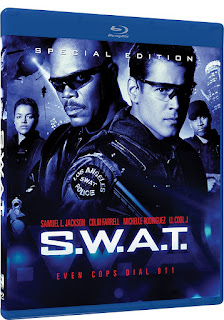 One of the fun things about revisiting older films is spotting early appearances by A-list actors before anybody ever heard of 'em. In 2003's S.W.A.T., for example, there's Jeremy Renner in his first substantial mainstream role (as one of the primary bad guys). And isn't that future Oscar winner Octavia Spencer in a blink-and-you'll-miss-it scene with only one line of dialogue (billed as 'Neighbor in Alley')?

Elsewhere, S.W.A.T. is a generically entertaining action flick inspired by a 1975 cop show with a theme song more memorable than any of its episodes (and only ran two seasons). But other than that song and a few characters' names, this film is pretty-much S.W.A.T. in-name-only, more Jerry Bruckheimer than Robert Hammer (creator of the original series).

Samuel L. Jackson and Colin Farrell are Hondo & Street, who lead your garden-variety elite team of hot-shots tasked to transport notorious druglord Alexander Montel (Oliver Martinez) into federal custody. Unfortunately, Montel has publicly offered $100 million to anyone who can spring him from custody. This brings a slew of scumbags out of the woodwork, including a disgraced former cop (Renner), who used to be Farrell's partner.

Big, loud and polished to a glistening sheen, S.W.A.T. is as slick as any other 21st Century action film you'd care to name. But while it's entertaining in the moment, there's nothing particularly memorable about it, certainly nothing that evokes nostalgia for the original show. Since its intended audience probably wasn't even alive in '75, it's mostly a checklist of modern action tropes. As such, S.W.A.T. isn't the worst of its kind. It's suitably fast paced, with perfunctory performances, decent action and a plot just forgettable enough to seem new again upon repeated viewings.

S.W.A.T. has recently been resurrected as a new series, which one might assume is the main reason for the movie's Blu-Ray re-release. But is it a reboot of the show or the movie? If it's the latter, this might be the first time a series has piggybacked on nostalgia for a movie originally made to cash in on another generation's nostalgia.