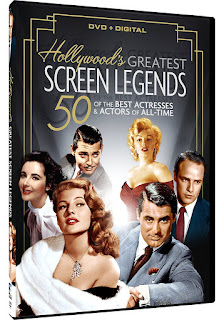 If you're a classic film fan who values quantity over quality, here you go...

As far as I've been able to ascertain, Hollywood Remembers is a series featuring half-hour biographies of acting legends. Personally, I'd never heard of the program until now, nor do I have any idea if they are still producing episodes. One thing I do know is that if you're looking for anything with much depth, look elsewhere.

Individual episodes focus on one particular iconic actor, and mostly consists of public domain footage and/or grainy trailers of selected films he/she appeared in, along with fawning narration that mostly serves as simple transition from one clip to the next. Unfortunately, we don't learn much beyond the highlights of their filmographies. No interviews, no behind-the-scenes footage, no revelations or insights. Most episodes play like those greatest hits albums K-Tel used to assemble in the 1970s, which crammed clips and snippets of great songs onto one LP, but left the listener wanting more.

However, this inexpensive set is admittedly loaded - 50 episodes spanning four discs - and although most of the featured stars' heydays were prior to the 1960s (as is a majority of the footage), it's hard to argue with their status as screen legends. If one simply enjoys classic movie trailers, this budget-friendly collection has them in abundance. Just don't expect much beyond that.