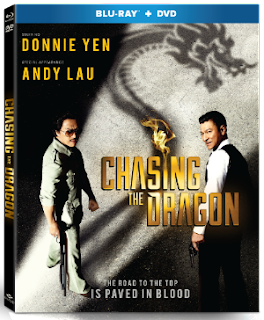 Enter our Blu-Ray giveaway of CHASING THE DRAGON

For fans of Asian action movies, the first-time teaming of Donnie Yen and Andy Lau is every bit as monumental as DeNiro & Pacino getting together to do Heat. And like that classic crime thriller, Chasing the Dragon doesn't disappoint. Not only is a film nearly as epic, Yen and Lau share the screen a lot more than a single token scene together.

A remake of 1991's, To Be Number One, the film chronicles the rise of Crippled Ho (Yen) from a lowly illegal immigrant to Hong Kong's most powerful druglord, with considerable help & protection from Lee Rock (Lau), an ambitious and corrupt police inspector. Through the years (roughly 1963 through the early-seventies), both rely on each other's knowledge, power and trust to form a nearly-untouchable criminal empire.

And yes, these are the good guys. Their enemies - on both sides of the law - are far worse.

But unlike, say, Tony Montana in Scarface, who's a vicious, hot-headed, lying bastard from the get-go, Ho and Rock are genuinely likable. There's even a certain level of nobility in their loyalty to each other and those who've earned their trust, to the point the viewer tends to overlook their morally-questionable career choices. This wouldn't happen without a compelling story, well-realized characters and, most importantly, the two leads' natural charisma. Not only are Yen and Lay terrific, their onscreen chemistry has one hoping this isn't the last time they work together.

Sweeping in scope and gloriously over-the-top, Chasing the Dragon is complex, violent and - even when checking-off familiar gangster movie tropes - enjoyably unpredictable. Despite a fairly lengthy running time, the film is fast-moving and rarely dull, generally only slowing down long enough to provide necessary exposition, leaving plenty of room to showcase Yen and Lau's considerable physical skills.

Chasing the Dragon is an enormously entertaining crime thriller in the fine tradition of such pulpy potboilers as Scarface, New Jack City and Andy Lau's own Firestorm (one of my personal favorites of his). With these two superstars leading the way, it's hard to imagine an action fan who won't get a big kick out of it. This is a very early candidate for the best action Blu-Ray of the year.

MEE-OW! LIKE TAUNTING A MOUSE TO DEATH
Posted by D.M. Anderson at 8:35 PM