Blu-Ray Review: THE MOUNTAIN BETWEEN US 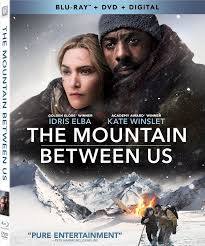 Since my wife has declared Idris Elba to be one her next potential husbands, I thought she might want to sit-in on this one. She declined, however, saying it sounded depressing. For the most part, Francie prefers lighter fare...comedies, romance, action, sci-fi or various combinations of those genres. Dark, gritty intensity isn't really her thing.

After watching The Mountain Between Us, I concluded that Francie should've taken me up on the invite because this was more up her alley than mine.

Elba and Winslet play Ben and Alex, two strangers who have urgent destinations but inclement weather strands them in Boise. Desperate, they charter a small plane, which crashes in the snowy mountains after the pilot (Beau Bridges) suffers a stroke. Along with the pilot's dog, they are forced to make their own way through the mountains to try and save themselves. There's danger along the way, of course - not made any easier by Winslet's leg injury - but aside from a creatively vivid plane crash, none of it is particularly gripping or intense, nor do we often fear for these characters' lives (though I was occasionally worried they were gonna end up eating the dog).

But it turns out that The Mountain Between Us is more about the developing relationship between the two leads than their perilous predicament. The so-called "mountain" of the title is the personal barrier Ben has put up, which Alex seems determined to climb over. Without going into "spoiley" specifics, when they aren't wading through hip-deep snow or eating mountain lions, Ben and Alex discover they need each other for more than mere survival. So yeah, the movie turns into a love story. While that isn't necessarily a deal-breaker, it does render the second half a little less interesting for those of us expecting an angry bear or inconvenient avalanche to liven things up. Still, it's a decent enough story boosted by considerable star power, one damn charming dog and some beautiful locations.

While it ain't exactly The Revenant - or even The Grey - The Mountain Between Us is certainly watchable and entertaining enough if one knows what they're in for. Not-so-much a survival tale as it is a love story under dire circumstances, fans of the two actors (Elba in particular) should enjoy it. Looks like Francie missed out.