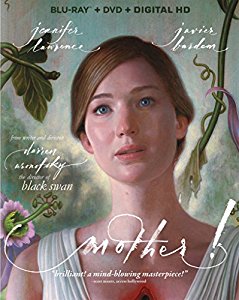 Somewhat notoriously - and superficially - mother! has been cited as a current example of the extreme disconnect between professional film critics and general audiences. That it was marketed as a mainstream horror film didn't help matters, either.

The ones who angrily walked out of the theater crying "WTF?" were obviously unfamiliar with writer/director Darren Aronofsky. Aside from Noah - his most accessible (and boring) film - confounding the viewer has been his mantra. And Aronofsky doesn't make horror movies. He makes WTF movies. If WTF can be considered a genre, then Aronofsky is arguably its Hitchcock.

That being said, mother! will certainly appeal to those in-sync with his surrealist sensibilities. Like Aronofsky's more challenging films (Pi, Requiem for a Dream and especially Black Swan), it's ambiguous, disturbing, abrasive, baffling, pretentious, lurid and sometimes brutally violent, with heaping helpings of WTF along the way. But whether the viewer is intrigued or repulsed, one thing it's not is boring.

Jennifer Lawrence and Javier Bardem play a (happily?) married couple living in an isolated old house in the middle of nowhere. While she's busy renovating the place, he's struggling to find inspiration for his next book. There's something not-quite-right about their relationship (besides the fact he's twice her age), which is exasperated with the unexpected arrival of a sickly stranger (Ed Harris) and his dysfunctional family. All the while, there may be something awful going on with the house itself, which only Lawrence's character appears to be aware of.

Following a bloody accidental death and the weirdest funeral reception you've ever seen, Lawrence kicks the family out of the house. She becomes pregnant and Bardem finds his muse to write his next book (none of these character's have actual names). Things seem idyllic for awhile, until zealous fans of Bardem begin to show up. As for what follows...WTF?

Don't take this to the bank, but at times, mother! appears to be some sort of biblical allegory. It could also be seen a denouncement of atrocities committed in the name of a higher power. Perhaps it's a commentary on zealous worship and megalomania. It might even be about the second coming, the apocalypse or a satiric depiction of God as a cruel, self-serving bastard. Or maybe I'm full of shit and Aronofsky just wants the viewer to scream "WTF?". Whatever the case, mother!, while certainly horrific, is definitely not a horror film. It's far more unsettling than that, like most of Aronofsky's filmography.

mother! is certainly the most bizarre movie released by a major studio in a long time and will likely spark love-it-or-hate-it debates for years to come. That it's wide open to various interpretations - or simply viewed as a disturbing fever dream - makes it not only memorable, but probably worth repeated viewings for those up to the challenge.