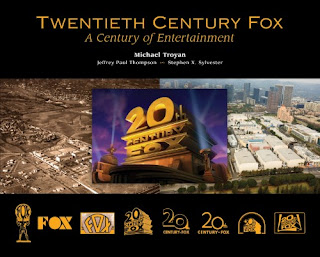 Everything you ever wanted to know about 20th Century Fox, but never thought to ask...

This hefty, handsome volume details the entire history of the iconic studio, from founder William Fox's ambitious beginnings through 2015 (you know...a century). But the book isn't primarily about Fox's movies. Though nearly every noteworthy film is mentioned, most are just briefly discussed within the context of the studio's history itself.

A Century of Entertainment is mostly about the rise of Fox - both physically and as a major Hollywood entity - as well as the moguls, producers, actors and executives who've come and gone over the years. Several chapters take the reader on a detailed tour of Century City, building by building, which include detailed maps and scores of photos. Elsewhere, the text chronicles the studio's highs and lows over the decades, along with the power players behind the scenes. We even learn the origins of Alfred Newman's "Fox Fanfare" music and the evolution of the iconic 'searchlight' logo.

The studio's early days are written about in far greater detail, therefore the most interesting (like most origin stories or biographies). Once it's established that Fox is an entertainment giant that's here to stay, the 1950s-on-forward are summarized more briefly, sometimes becoming a breathless list of notable films released during those eras. Later chapters cover the corporation's expansion into television, such as classic TV shows, the FOX network and cable channels.

In addition to being a fascinating read, this is a beautifully-assembled, hardcover coffee table book filled with hundreds of rare photos to accompany the text. Though it comes with a price nearly as heavy as its weight, 20th Century Fox: A Century of Entertainment is a must-have for serious fans of Hollywood history.

Just don't drop it on your foot.
KITTY CONSENSUS:

MEE-OW! LIKE BEING TURNED LOOSE IN A BIRD SANCTUARY
Posted by D.M. Anderson at 5:53 PM