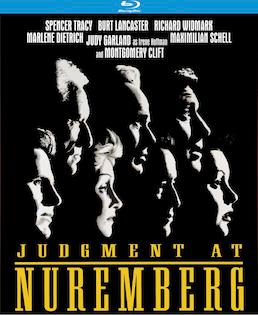 The event the world will never forget! Winner of two Academy Awards including Actor in a Leading Role (Maximilian Schell, Topkapi) and nominated for eleven Academy Awards®, including Best Picture, Judgment at Nuremberg is a magnificent achievement in filmmaking, boasting brilliant performances by an all-star cast. American judge Dan Haywood (Spencer Tracy, Inherit the Wind) presides over the trial of four German jurists accused of "legalizing" Nazi atrocities. But as graphic accounts of sterilization and murder unfold in the courtroom, mounting political pressure for leniency forces Haywood to make the most harrowing and difficult decision of his career. This masterpiece, considered by many as one of the greatest films of all time, was directed by the great Stanley Kramer (On the Beach) with a stupendous cast that includes Burt Lancaster, Richard Widmark, Marlene Dietrich, Judy Garland, Montgomery Clift and William Shatner. 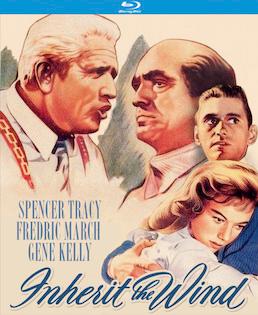 Acting legends Spencer Tracy (Judgment at Nuremberg) and Fredric March (The Iceman Cometh) go toe-to-toe in this thrilling recreation of the most titanic courtroom battle of the century. The great Stanley Kramer (On the Beach) directs this masterpiece featuring Gene Kelly (On the Town) in a rare, critically acclaimed dramatic role. Inherit the Wind is powerful, provocative cinema and a heaping measure of entertainment. The controversial subject of evolution versus creation causes two polar opposites to engage in one explosive battle of beliefs. Attorney Clarence Darrow (Tracy) faces off against fundamentalist leader William Jennings Bryan (March) in a small Tennessee town where a teacher has been brought to trial for teaching Darwinism. The stellar supporting cast includes Dick York, Donna Anderson, Harry Morgan, Claude Akins, Norman Fell and Noah Beery Jr.
Posted by D.M. Anderson at 1:34 PM