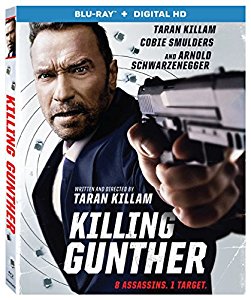 Don't be fooled by the cover. This is not another Arnold Schwarzenegger action-fest. In fact, he doesn't even appear onscreen until the final 15 minutes.

Nor is it even an action movie. Instead, Killing Gunther is a mockumentary written, directed-by and starring Saturday Night Live alum Taran Killam. Aiming for a vibe similar to a Christopher Guest film, Killam plays Blake, a cocky killer-for-hire who targets the  top-dog in the assassination business, Gunther (Schwarzenegger), for bragging rights. He recruits a goofy assortment of colleagues and hires a film crew to document everything for posterity. Unfortunately for them, Gunther is much better at his job than even they assumed.

Some of this is funny and most of the characters are amusing (if a bit over the top). Blake himself is probably the most well-rounded character with an interesting backstory (his wife, also a former assassin, left him for Gunther). However, a little of this goes a long way. Unlike Christopher Guest's best films, which manage to sustain their premises for the entire running time, Killing Gunther eventually feels like one of those Saturday Night Live sketches that doesn't know when to quit. What starts off as humorous - occasionally laugh-out-loud funny - eventually grows repetitive and tiresome until Arnold finally shows up to give the film a much-needed shot in the arm.

While it might have been more effective as a short, Killing Gunther is sporadically funny enough to make it worth sitting through and has a chuckleworthy twist ending. However, I do think it was a mistake to market the thing as a Schwarzenegger vehicle. Even though I totally understand why, wouldn't it have been great if he were given no billing at all, completely catching viewers off guard? Just sayin'.