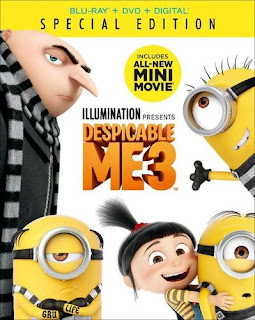 A funny thing happened on my way through Despicable Me 3...it turned into a sequel to two different movies.

This is, foremost, the third film in Illumination's uber-popular franchise. Gru and his wife, Lucy, are now agents for the Anti-Villain League, but get fired after failing to apprehend former 80's child star-turned supervillain Balthazat Bratt. Gru then gets an invite from long-lost twin brother, Dru, who lives in Freedonia. So Gru brings the whole family along, at which time the film juggles several concurrent stories: Lucy struggling with being a stepmom, little Nev's quest to find a real unicorn and Gru & Dru trying to steal back a diamond stolen by Bratt, who wants revenge on Hollywood by destroying the entire town and needs the jewel to power his giant robot.

Meanwhile, the Minions, disgusted that Gru was fired from his job, have abandoned him, but end up going to prison. At least a third of the movie is dedicated to their misadventures and in-no-way figures into the main plot, meaning Despicable Me 3 frequently plays more like a Minions sequel. One's enjoyment of these little fellas depends largely on whether or not you've already had your fill of their antics (for this writer, the threat of overkill looms large).

With all these subplots padding things out, Despicable Me 3 is narratively the most meandering in the series. Furthermore, despite dedicated voice work by Trey Parker, Bratt isn't a very interesting villain. Having your character embody everything goofy about the 80s isn't really that clever, since people have been poking fun at that decade ever since it ended. Such gags and references will be lost on kids, while their parents have seen & heard it all before.

But that's probably nitpicking. Like the previous films, Despicable Me 3 is colorful, exuberant and just amusing enough to keep it from being a parental endurance test while their kids laugh their butts off. If nothing else, the film knows its audience, which I suppose qualifies as praise.