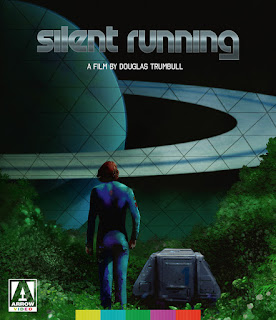 Review by Stinky the Destroyer😹

Silent Running is the first movie that ever gave me a case of ’the feels,’ as my daughter calls it.

I was just a wee one when I caught it on NBC on a Friday night, after the preceding TV spot had me anticipating an exciting sci-fi adventure. However, I got more than I bargained for.

Bruce Dern stars as Freeman Lowell, a botanist onboard the Valley Forge, one of several cargo ships carrying the last of Earth’s plant and animal life (enclosed in massive glass domes). When the crew is given orders to jettison and destroy the domes and return the ships to commercial use, Lowell goes to extremes to save the lone remaining forest, killing his crewmates and changing course in hopes of disappearing. A majority of the film consists of Lowell and two endearing little drones (Dewey & Huey) maintaining the forest, when we grow to love this de facto family. But when a rescue team discovers their whereabouts, Lowell is forced to make some heartbreaking decisions in order to save the forest.

And heartbreaking this movie is. Silent Running turned out not to be the action-packed extravaganza I signed-on for at the age of 10. It’s a shamelessly manipulative film which forces us to not only condone Lowell’s murder of his crewmates, but feel an enormous sense of loss with every exploding dome. Additionally, Silent Running has us more emotionally invested in the fates of two faceless, emotionless robots than most of the human characters. These elements, along with the tragic conclusion, were total Kleenex fodder, which I wasn’t expecting. By the time the end credits rolled, I was practically bawling and thankful everyone in the family had already gone to bed. It was the first movie that ever actually made me feel anything. But despite my sorrow, I liked how it made me feel.

Revisiting the film for the first time in years with this new Blu-ray, I still found myself choking-up from time to time. Not just because I was once-again invested in the plight of its characters, but that its none-too-subtle message seems alarmingly more relevant now. Some of its flower-power environmental sermonizing probably seemed a bit heavy handed back in ‘72 (when most of us kids associated ‘climate change’ with snow days). But 48 years later, the world is arguably closer to the bleak future depicted in Silent Running than the advanced optimism of 2001: A Space Odyssey.

In addition to its sobering themes and pessimistic view of humankind, Silent Running remains one of the more technically impressive sci-fi films of the pre-Star Wars era, especially when one realizes it had a budget of only a million dollars. One of only two films directed by FX-whiz Douglas Trumbull, the visuals are simple yet effective, and hold up pretty well even today.

Silent Running has since become a cult classic that belies its age with a timely message and an affecting story. Arrow Video does right by the film with an outstanding video & audio transfer that’s a huge improvement over the 2015 Universal Blu-ray. All the bonus features from that disc are included here, along with a great batch of new ones, making this edition a must-own for fans. The only thing missing is a box of tissues because it’s still one of the most bittersweet sci-fi movies ever made.

NEW: “FIRST RUN” - This is a video essay - with storyboards - which reveals how the first draft of the screenplay was much darker (and more violent).

NEW: BEHIND-THE-SCENES GALLERY - Over 600 pictures, though many of them look like still from the film itself.

“A CONVERSATION WITH BRUCE DERN” - Archival Interview. Bruce has fond memories of this film, and especially Trumbull.

REVERSIBLE COVER - With new and vintage artwork. We kind-of prefer the new cover.

MEE-OW! LIKE BEING TURNED LOOSE IN A BIRD SANCTUARY.
Posted by D.M. Anderson at 8:22 PM