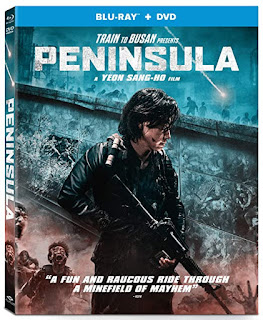 Train to Busan’s highly-anticipated sequel, Peninsula, isn’t nearly as good. But I can’t really say I was disappointed.

The original 2016 film had the distinction of topping Dawn of the Dead’s 38 year reign as my personal choice for the greatest zombie movie ever made (sorry, George). Thrilling, scary, funny and surprisingly touching, it even made this website’s Greatest Movies Ever list.

But if George Lucas and the Wachowskis taught me nothing else, it’s to keep one’s presumptions in-check, especially regarding sequels to universally revered films. So I didn’t expect Peninsula to top - or even equal - the visceral rush Train to Busan. If the thing ended up being even half as engaging, it would still be better than a majority of the zombie films released in the past decade.

If you can approach it with the same tempered expectations, Peninsula is a solidly entertaining action-horror film. Though it has the same director (Yeon Sang-ho) and co-writer (Park Soo-Suk), this one is completely different in tone, pace and narrative approach, with an all new setting and cast of characters. Only the snarling hordes of sprinting zombies - which have now overrun South Korea - connect the two films.

Four years after the outbreak, South Korea is under quarantine. Most of the survivors have long-since been relocated to Hong Kong, where they are more-or-less treated like pariahs. One of them, Jung-seok (Gang Dong-won), is an ex-soldier who was unable to save his sister and, more significantly, refused to help a pleading family get to the evacuation ship. So he lives with a ton of guilt, exacerbated by his combative relationship with ex-brother-in-law Chul-min (Kim Doo-yoon).

They’re hired by a local gangster to return to the peninsula and retrieve $20 million stashed in an abandoned truck. If successful, they’ll get half the money. The city is still crawling with zombies, as is what’s left of the South Korean army. No longer soldiers, they’re a squad of psychotics commanded by Captain Seo (Koo Kyo-hwan) and his sadistic second-in-command, Sergeant Hwang (Kim Min-jae). Jung-seok also runs into Min-jung (Lee Jung-hyun), the mother who begged him to help her four years ago. She and her two daughters have since become pretty resourceful at survival.

If nothing else, you can’t accuse the filmmakers of repeating themselves. It does, however, appear that they looked to such films as Escape from New York for inspiration, which also applies to the setting and production design. Overall, the performances are pretty good and Dong-won makes an intriguing anti-hero who’s given an opportunity for redemption. And of course, the zombie hordes are as fleet-footed, vicious and nasty as ever. For the most part, the film is fast-paced and exciting with a few creative flourishes, such as an arena where victims are thrown in with zombies and soldiers wager on who survives.

But unlike Train to Busan, there isn’t a lot of heart. Though there’s a fleeting attempt at poignancy near the end, we aren’t invested in these characters nearly enough for the moment to be truly affecting. The film also lacks an interesting antagonist. The first film featured a man who evolved into someone we hate through his increasingly self-serving actions. Here, Seo and Hwang are gleefully evil from the get-go, generic bad guys we’ve seen in countless other apocalyptic thrillers. And while most of the film is technically sound, there are occasional moments nearly ruined by clumsy CGI, such as a car chase sequence that resembles video game graphics.

Train to Busan was one of those rare films that managed to transcend its genre and chances-are the law of diminishing returns would apply to any follow up. So perhaps going in a completely different direction was a wise decision. When viewed as a stand-alone story that takes place in the same universe - as opposed to a true sequel - Peninsula is an enjoyable, action-filled horror film. You just gotta temper your expectations.

4 PROMOTIONAL FEATURETTES - These mostly consist of interviews with the primary cast and the director.