A Lot to Love in LIBELED LADY 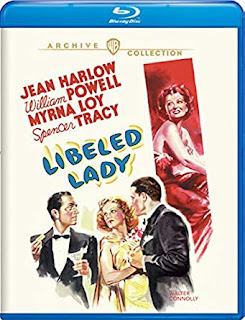 What’s not to love? There's another reteaming of William Powell and Myrna Loy, with a bonus reteaming of Powell and Jean Harlow. Throw in the great Spencer Tracy in a rare early role as the main antagonist and you’ve got a priceless cast that makes Libeled Lady one of the more purely entertaining comic farces of the 1930s.

Workaholic newspaper editor Warren Haggerty (Tracy) is trying to save his paper after they print a libelous story about a millionaire’s daughter, Connie Allenbury (Loy), who sues them for $5,000,000. He concocts a scheme by arranging a "marriage" between his beleaguered fiance Gladys Benton (Harlow) and smooth talking ex-reporter Bill Chandler (Powell). Then Chandler will try to romance Connie so she’ll be caught in the same type of husband-stealing scandal the newspaper falsely reported the first time.

But Bill ends up falling for Connie, of course, which complicates the plan. If such a plot turn feels overly familiar, it’s likely because we’ve been inundated by countless similar stories - including a remake - in the decades since. However, few of them are as affable, charming and funny as this one. Most of that is due to the cast and a terrifically witty screenplay with enough rapid-fire dialogue and throwaway one-liners that we can’t catch it all the first time.

So there's a lot to love, here. Powell and Loy’s chemistry is indisputable, while Harlow is hilariously bitchy. Even Tracy manages to remain somewhat likable even as he’s conspiring to save his own job. Libeled Lady showcases their inherent talents with a charming, funny tale worth repeated viewings.

This movie is an all-time classic. I can’t recommend it highly enough - see this movie.