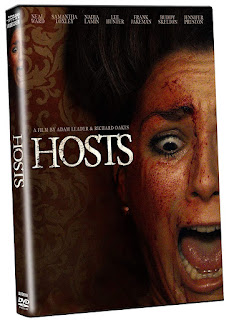 Hosts boasts the most shocking, brutal and disturbing on-screen murder I’ve seen in years. However, what makes the scene so harrowing has nothing to do with blood and gore. While still pretty graphic, directors Adam Leader & Richard Oakes actually show an admirable amount of restraint. But the context in which the attack occurs gives this excruciatingly long scene a level of cruelty that borders on unwatchable. Though we sort-of see it coming, its unprovoked viciousness is an emotional sucker-punch.

Whether the viewer is thrilled or horrified, it’s a scene they aren’t likely to forget. The rest of Hosts doesn’t match the intensity of that moment, which might actually be a good thing. There’s still mayhem o’ plenty, but if every death was just as horrifying, it would ultimately lessen the overall impact.

Though erratically paced and narratively muddled, Hosts benefits from a few unusual touches, such as introducing the antagonists first: a young couple preparing to attend a family Christmas party, only to become possessed by luminous entities. When they finally arrive at the party, no one appears to notice their blank stares and bizarre behavior. Intentionally or not, these scenes provide the film’s few moments of levity.

It is never made clear whether these entities are demons or maybe extraterrestrials. One thing is certain...they’re sadistic as hell, subjecting each member of the family to all sorts of physical and psychological torment before assimilating them into what appears to be some kind of collective. Narratively, the film works in fits and starts. Meeting each character during the first act is kind-of dull, as are some ambiguities spouted by the entities, which only muddies the waters. However, once it picks up momentum, Hosts achieves a malevolent tone that rarely wanes.

Much of the tension and suspense is created by the film’s brutality and so-small-amount of mean-spiritedness, since these characters are mostly pretty likable and don’t deserve what happens to them. And indeed, some of them die very badly, though nothing which matches the cruelty of that initial death scene. It’ll take me a long time to get over that one. Considering how many horror films I’ve seen, that’s really saying something.

“BEHIND THE SCENES” - A lengthy, highly-amusing look at the making of the film.