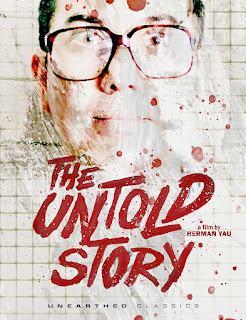 For the uninitiated - like me - ‘Category III’ is Hong Kong’s equivalent of the NC-17 rating. It also has a history of being synonymous with exploitation at its most depraved.

You should know this going in because The Untold Story is one of Hong Kong's more notorious Category III films. Rape, torture, cannibalism and the onscreen killing of children are just a few of the pleasantries that await.

Wong (Anthony Wong) is an unhinged gambling addict who murders a man for not lending him money, then flees to Hong Kong. A decade later, he’s running the Eight Immortals Restaurant. With the former owner (and his entire family) missing and a bag of body parts washing ashore, cops begin sniffing around. Wong also kills a few employees who suspect him of foul play, chopping and grinding the bodies before making them the main ingredient in his popular pork buns.

It shouldn’t take Hercule Poirot to figure out what’s happening. However, on the case is a squad of comically bumbling cops led by Officer Lee (Danny Lee), who has a different woman on his arm whenever he shows up and seldom engages in any real police work (one of the film’s more amusing running gags). Still, they manage to get their man - mainly because Wong looks and acts suspicious from the get-go - and spend most of the second act trying to torture a confession from him.

For a while, The Untold Story is actually pretty funny. The goofy dialogue, gonzo gore and a wonderfully over-the-top performance by Wong hold the promise of a twisted good time not-unlike Peter Jackson’s early work. Then Wong beats, rapes and sexually mutilates one of his victims in a long, agonizing scene that pretty much kills any fun we had watching him. Immediately afterwards, it’s back to the cops’ silly shenanigans.

The film is constantly shifting tonal gears, which ultimately works against it. In the final act, a scene where an entire family is savagely murdered on-screen is so long, vicious and explicit that it ruins the punchline which follows (and would have been laugh-out-loud hilarious if we hadn’t just watched a child get beheaded). Even when Wong is enduring lengthy torture at the hands of cops, the thrill of vicarious revenge is largely absent due to some heavy-handed commentary about police brutality.

Not that I was ever shocked or offended - hey, I’ve seen Cannibal Holocaust, so bring it on - but Yau really should have picked one tone and stuck with it. Overall, The Untold Story is well made for an exploitation movie. The humor is pitch black and often very funny. The murder scenes are graphic and disturbing. The story itself - inspired by a real incident - is pretty engaging. However, none of the ingredients are stirred too well, resulting in a dish that is sometimes tasty, sometimes distasteful, but seldom at the same time. Still, would-be thrillseekers might appreciate its no-holds-barred approach to taboo smashing.

“CATEGORY III: THE UNTOLD STORY OF HONG KONG EXPLOITATION CINEMA” - Feature-length documentary on the wild history of ‘Category III’ films. By far, the best of the bonus features.

“CANTONESE CARNAGE: RICK BAKER ON ‘CATEGORY III’” - Not the make-up artist. This Rick is a video distributor who acquired various ‘Category III’ films for release in England.

“Q&A WITH HERMAN YAU” - Segment from an appearance by the director. Turn it up, because the acoustic in the place where it was shot are terrible.