The Curiosity Factor of THE OTHER SIDE OF MADNESS 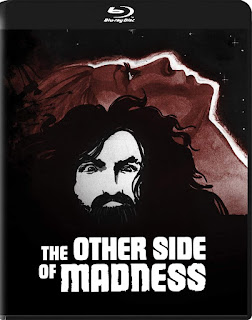 From THE FILM DETECTIVE

If you thought recent films like Once Upon a Time in Hollywood and The Haunting of Sharon Tate exploited the real-life Manson murders for the sake of entertainment, this unearthed relic might redefine the word for you.

What makes The Other Side of Madness such a historical oddity is that it was produced and released during the actual Charles Manson trial, going as far as to include some of his music in the soundtrack (producer Wade Williams even sought-out Manson’s permission). Profiting from the most infamous mass murder in American history - before the victims’ bodies are even cold - demonstrates a level of callousness unparalleled even in exploitation circles.

This micro-budget docudrama opens with a crawl stating that everything is lifted from news releases and articles, all of which was widely available to anyone who could read. Hence, there are no untold stories, no revelations, no new evidence. Director Frank Howard & producer Wade Williams appear content to simply re-enact sporadic events based on testimony and articles, including the Tate murders. But there’s little attempt to provide context or continuity, nor is there much dialogue beyond a few “characters” taking the stand during trial.

Aside from some fleeting attempts at psychedelic artiness, one can practically feel how quickly they were trying to get this film in-the-can. The performances are uniformly terrible, consisting mostly of amateurs, and Howard effectively demonstrates why he never directed another movie. However, the fact something like this even exists will make it worth seeking-out by the morbidly curious.

Since the movie itself is a shoddy slab of sleaze - and actually kind of boring - it’s the disc’s bonus features that might hold the most interest. In a couple of interviews, producer Wade Williams provides context his film doesn’t bother with, and the story behind it is admittedly fascinating. If nothing else, he answers the nagging question you’ll undoubtedly be asking: “Who the hell would make something like this?”

CD - Two songs by Manson himself, both of which are featured in the film and packaged in a replica of the original promotional sleeve. One listen and you’ll understand why he never became a rock star.