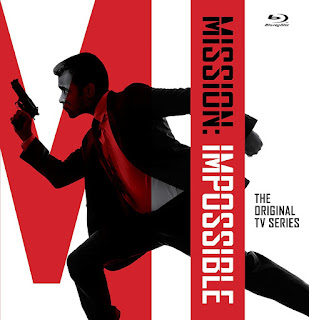 While Tom Cruise was running around in training pants, Mission: Impossible was a weekly staple in my house (and millions of others). We had one TV - a giant console capable of picking-up all three channels - so with the exception of Saturday mornings, Dad pretty-much dictated the family’s viewing habits. Hence, we spent many evenings watching the exploits of the IMF.

Now on Blu-ray for the first time, this meaty boxed set includes all seven seasons, 171 episodes on 46 discs. Unfortunately, there are no bonus features, but the show has been nicely remastered and has never looked or sounded better, not even during its first run. Revisiting the series after all these decades brings back a flood of fond memories, as well as a revelation or two.

Being way too young to understand the relatively complex storylines, most of my memories are of the show’s format, which it adhered for a majority of the episodes, such as the self-destructing tape laying-out the mission, should Jim Phelps (Peter Graves) choose to accept it. I seem to recall asking Dad what would happen if Phelps didn’t accept a mission; he replied “I don’t know,” but I’m pretty sure he meant “Shut up, kid.”

Then there’s the cool gadgets, courtesy of Barney (Greg Morris), and elaborate disguises used by Rollin Hand (Martin Landau), which might seem a bit quaint today. But back then, it was sort-of like getting a mini James Bond movie every week. And of course, the bad guys were always duped by the IMF’s elaborate, often outlandish ruses, generally with fatal results.

Other than some aesthetics reflective of the era, the episodes themselves hold up pretty well, with smart writing, grounded performances and intricate plots, which are a lot more engaging now that I’m old enough to understand them. The stronger ones tend to be those featuring the threat of mass destruction and arrogant, megalomaniacal villains, of which there are many. To my surprise, it turns out the INF was repeatedly saving the world long before anyone ever heard of Ethan Hunt.

Speaking of which, watching these episodes today revealed quite a few other surprises. For example, most classic TV fans tend to associate Mission: Impossible with Peter Graves, but he didn’t actually join the show until season two. For the first season, the IMF was led by Steven Hill, best-known to modern audiences as grumpy DA Adam Schiff in Law & Order. Similarly, Martin Landau and Barbara Bain were gone by season four, the former replaced by Leonard Nimoy. Even Leslie Ann Warren and a baby-faced Sam Elliot were cast regulars during one of the later seasons. In fact, only Greg Morris and Peter Lupis stayed with the show through its entire run.

Another surprise was the number of guest stars who appeared on the show, sometimes more than once, to play various antagonists. Such famous faces as William Shatner, Robert Conrad, Fritz Weaver, Lloyd Bridges, Edmond O’Brien, Braford Dillman, Sugar Ray Robinson, Fernando Lamas, Christopher George, Darrin McGavin and Ricardo Montalban (amusingly similar to his iconic turn as Khan in Star Trek) show up as the villain-of-the-week. Half the fun of plowing through this set is seeing who pops-up to get their bad guy groove on.

The whole set comes in a nicely-designed box, each season individually packaged in fold-out cases with sleeves to hold the discs. Considering the size of the collection, it isn’t too cumbersome. Mission: Impossible itself remains iconic, highly influential and one of the defining series of the late ‘60s/early ‘70s. Beautifully remastered for Blu-ray, the show remains wonderfully entertaining and an essential purchase for fans like my dad. Only the complete lack of supplementary material keeps it from being a perfect set.
KITTY CONSENSUS: