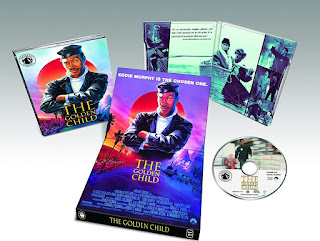 Some movies become big hits out of sheer will.

The working definition of high-concept, 1986’s The Golden Child was cynically assembled to cash-in on Eddie Murphy’s undeniable popularity and the endearingly brash persona that elevated Beverly Hills Cop. In fact, the only real difference between Axel Foley and Chandler Jarrell is their names.

Pumped-up with special effects and an overbearing score - neither of which have aged too well - The Golden Child is by-the-numbers filmmaking at its most shallow...even for the ‘80s. One can practically hear director Michael Ritchie instructing his star to simply go on-set and “do your Eddie thing.” Throw in an obvious attempt to earn a PG-13 rating (Eddie’s first) and it’s clear the primary goal was box-office bank.

And it worked. Despite being Murphy’s worst movie of the decade, The Golden Child was another huge hit. But with hindsight, it’s also an ominous sign of the comedian’s eventual creative nadir, when he'd sleepwalk through a plethora of putrid pictures (some of which make The Golden Child look like 48HRS). Ultimately, you still need a worthwhile story, interesting characters and a director who cares about both.

The film remains the undisputed low point of Murphy’s heyday. But in a way, that sort-of renders it an interesting addition to the ongoing Paramount Presents series. Throughout the ‘80s, Paramount was nearly synonymous with high-concept blockbusters, many of which were among the biggest hits of the decade. If this Blu-ray series is indeed intended to represent the studio throughout the years, then The Golden Child’s inclusion actually makes sense from a historical perspective (though it’s easily the least essential).

“THE MAKING OF THE GOLDEN CHILD” - Two-part archival documentary, totalling just under 30 minutes.