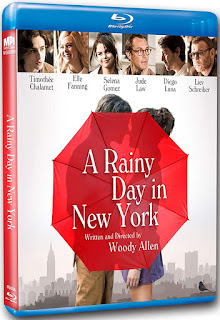 To be honest, I didn’t realize Woody Allen was still cranking out movies.

A lot has changed since the last time I paid attention, but based on A Rainy Day in New York, Allen’s song pretty much remains the same. Only instead of casting himself as an eccentric, angst-ridden, self-loathing protagonist, he’s found himself a little Mini-Me in Timothee Chalamet.

Chalamet narrates as Gatsby Welles, a wealthy college kid who’d rather play lounge piano and poker than live up to his mother’s lofty expectations. His girlfriend, Ashleigh (Elle Fanning), is a perky journalism major with the opportunity to interview respected film director Roland Pollard (Liev Schreiber) for the school paper. Gatsby decides to turn it into a weekend in New York, where he’d show her around his hometown. Instead, Ashleigh ends up gallivanting around town with assorted movie bigwigs. Meanwhile, Gatsby wallows in self-pity. He wanders town, plays some poker and chance-meets Chan (Selena Gomez), the snarky younger sister of an old flame. He also finds himself forced to attend a party hosted by his parents that he was hoping to avoid.

None of these vignettes are particularly interesting or funny, which is unfortunate because the plot and themes are already lighter than ether. The film superficially looks and sounds like vintage Woody Allen - right down to the music score and impressive ensemble cast - but it mostly feels like a tribute to himself. As an example, look no further than his protagonist. Chalamet has Allen’s inflections and mannerisms down cold, but his performance comes-off more as an homage than an actual character. Despite Fanning’s enthusiasm, Ashleigh is even shallower, as are the much-older men who are inexplicably attracted to her. Only a glorified cameo by Cherry Jones as Gatsby’s mother displays any real depth.

While nobody thinks Woody Allen has another Annie Hall in him, A Rainy Day in New York is a dull and forgettable film by a director still in love with the persona he’s now too old to perform himself. Like an aging classic rocker, he seems content to pay the bills by playing the hits with a backup band who weren’t even born during his prime.