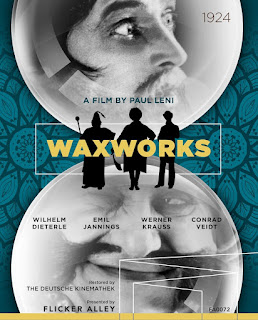 Not quite the first horror anthology film, Waxworks might be one of the most influential. Only one of its three tales could be considered horror in the purest sense, but the overall concept of the wraparound story and director Paul Leni’s typically gloomy atmospherics certainly had a lasting impact on the genre.

From a narrative standpoint, it never reaches the heights of Dead of Night, but for a 96 year old film, Waxworks is a technical marvel and visually fascinating, enhanced by one of the more impressive restorations I’ve seen in a Flicker Alley release.

The basic premise has a young poet (William Dieterie) hired by the owner of a carnival waxworks to write backstories for three of his historical exhibits, the subjects of the tales which follow. In the first, the Caliph of Baghdad (Emil Jannings) tries to seduce a poor baker’s wife while her husband is away. Meanwhile, the baker is plotting to sneak into the palace and steal Caliph’s priceless “wishing ring.” It’s the least compelling story of the three, but the production design is astounding.

Next is the story of Ivan the Terrible. As played by perpetually-creepy Conrad Veidt, the Czar’s cruelty and sadism are well-established before a heaping helping of karma pays him a visit. After a slow start, this story features a deliciously-ironic twist that would be right at home in a classic Tales from the Crypt story. However, the only full-blown horror segment is the last one, a surreal six-minute tale of the poet dreaming about being pursued by Jack the Ripper.

Sadly, Waxworks will never be a complete movie again. As indicated in a pre-title card, some of the original film remains lost, though not enough to negatively affect the pacing or continuity of this restored version. That, coupled with a fourth segment that was supposedly ditched during production, has one wondering what kind of film it could have been. Still, what remains is thoroughly enjoyable and a must-see for those interested in horror cinema’s history. Though not a pure horror film, its visual influence on the genre is obvious.

“REBUS-FILMS NR. 1” - Two-part short which book-ended the film during its initial release in Germany. Sort of a crossword quiz with the answers provided after the feature.