THE MORTAL STORM: The Dark Side of Human Nature 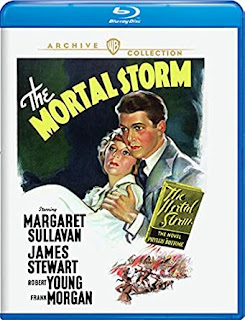 It’s always interesting to see an actor play against type. Most of us remember Robert Young as a dashing leading man or loving TV dad. But in 1940’s The Mortal Storm, he portrays an ambitious supporter of newly-appointed German chancellor Adolf Hitler, forsaking family and friends as he becomes a loyal member of the rising Nazi Party. What might be surprising is how convincing he is, especially late in the film where he reckons with what blind loyalty has done to destroy those he loves. His sinister performance is one of many reasons the film is a must-see.

Elsewhere, lifelong friends Freya Roth (Margaret Sullavan) and Martin Breitner (James Stewart) struggle to remain politically neutral, branded as pacifists as the country undergoes ominous changes. Freya breaks-off her engagement to Friz Marberg (Young), whose embrace of fascism drives her into Martin’s arms. Meanwhile, the Roth family is being torn apart. Her father, Professor Viktor Roth (Frank Morgan), has been arrested for teaching science contrary to the new government philosophy, while her two brothers disown the family to join the Nazis. Martin himself becomes a fugitive, not only for refusing to join the party, but saving a former teacher by helping him escape to Austria.

The Mortal Storm is obviously not a feel-good film, but the performances are excellent. As a stoic hero with unshakable ethics, Stewart doesn’t really stretch himself, though he’s extraordinarily likable. So is Sullavan, who effectively conveys Freya’s helplessness. But it's Morgan who gives the most affecting performance. From the moment Hitler is named chancellor, his subtle expressions and delivery perfectly foreshadow the atrocities to come. It’s through Viktor that we’re the most explicitly reminded of the dark path Germany is taking.

Speaking of which, the story itself is relentlessly compelling, mainly because we know this happened to countless real families. We see the dark side of human nature, where people’s worst tendencies surface through sheer manipulation. Conversely, the consequences for defying the new herd mentality are dire, even fatal. 20/20 hindsight precludes any kind of true ‘happy ending’; the best we can hope is that these characters either manage to survive the ordeal or get their just-desserts (though the viewer shouldn’t hold their breath for either).

Perhaps the most distressing aspect of The Mortal Storm is its unfortunate timeliness. Sure, the film is 80 years old and serves as a prelude to one of history’s darkest chapters, but one can easily draw parallels between the cultural intolerance displayed in the story and the divisiveness poisoning us right now (similarly exacerbated by incendiary political rhetoric). Are we doomed to repeat history? Who knows, but The Mortal Storm certainly offers a sobering preview.

In addition to being the best film Warner Archive has released so far this year, the bonus features are a fascinating dichotomy. Aside from a trailer, they’re unrelated to the film itself, but offer opposing attitudes over the nature of war. One is a brilliantly animated apocalyptic short that foretells our downfall, while the other plays like a Navy recruitment film.

MEE-OW! LIKE BEING UNLEASHED IN A BIRD SANCTUARY.
Posted by D.M. Anderson at 7:45 PM