IRON MASK and the Bad Batch 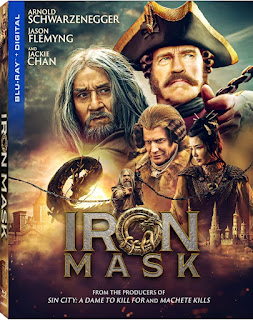 So cookie monsters beware...despite being prominently featured in the trailer and on the Blu-ray cover, Arnold Schwarzenegger and Jackie Chan are not the stars of Iron Mask. They share a couple of amusing scenes together, but they’re glorified cameos. The late, great Rutger Hauer has even less screen time (showing up for about a minute). And none of these guys’ characters are essential to the actual plot. Speaking of which, the iron mask of the title doesn’t really figure into the story, either. One character wears it for a while...until he doesn’t.

After a voice-over prologue laying the groundwork - a magic dragon held captive by a black witch masquerading as a Chinese princess in order to harvest precious tea from its eyelashes - the narrative puts its own plot on the backburner for nearly an hour. In the interim, it introduces most of the characters, including cartographer Jonathan Green (Jason Flemyng), imprisoned Russian czar Peter the Great (Yuri Kolokoinikov) and princess Cheng Lan (Xingtong Yao), who's traveling east with Green disguised as a male servant. We’re repeatedly led to believe one of them will emerge as the main protagonist, but that ultimately never happens.

Even oatmeal & raisin cookies can be at-least edible with the right recipe. However, Iron Mask is underbaked, made with ingredients well-past their expiration date. The derivative story is mostly advanced through hamfisted exposition by dull characters spouting some embarrassingly clunky dialogue. The elaborate production design is impressive, but the visual effects are strictly of the video game variety and not remotely convincing. To cap it all off, the film goes on way too long.

While not being promoted as one, this Russian-Chinese co-production is actually a sequel to a 2014 film called Viy (aka Forbidden Empire), which also starred Fleming and explains the presence of the “cute” flying cat-lizard (or whatever it is) in this one. I haven’t seen it, nor did Iron Mask compel me to go back and check-out what I’ve been missing. Not when there’s plenty of Chips Ahoy out there.