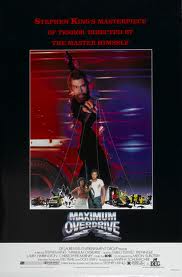 I have an English degree, which requires two inherent skills...the ability to write reasonably well and healthy talent for spinning bullshit. If you possess both, you can earn an English degree with relative ease compared to, say, trying to become an engineer. I'm not belittling my accomplishment or anything, but earning engineering credentials does open up a world of professional possibilities. What an English degree mostly does is allow you to get a job teaching English. Don't get me wrong...I love what my degree permits me to do, even if it mostly entails showing seventh graders how to put together a sentence which doesn't resemble a drunken Tweet.

English majors are required to read a ton of stories, novels & poems and analyze them to death, looking for symbolism or metaphor which may or may not have been the authors' intentions. There's a collegiate mindset that everything penned before the age of typewriters is inherently allegorical. Hence, guys like Guy de Maupassant, Jonathan Swift and William Faulkner are always held in high regard.

Regarding Faulkner, I had to endure an entire class dedicated to that guy's verbal vomit. After nine weeks, all I came away with was that he was a drunk who couldn't be bothered to proofread. Thank God I could bullshit, because even though I hated his work and couldn’t grasp anything he may have been trying to say, my papers made Faulkner sound like the greatest American writer of all time.

Bullshit goes a long way in college. One of my electives was a film study class, which I chose because of my life-long love affair with movies. I figured, at the very least, it would be an easy A and a nice break from the other required rigors I needed for my teaching degree. While I knew we wouldn’t be watching Die Hard, it wasn’t until I was sitting in class on that first day that I learned we’d be analyzing and writing about a bunch of old Japanese language films, primarily by director Akira Kurosawa. While initially a huge let-down, most of them turned out to be really great (my personal favorite was Throne of Blood). And of course, every film was supposedly loaded with themes and metaphors.

For our final, we had to pick a Japanese film from a list he provided, watch it, then compose an analytical essay comparing & contrasting its themes with another film or piece of literature. I chose Tampopo, a 1985 comedy that I at-least heard of. By this time in my educational career, my confidence level in the art of well-composed bullshit was at an all time high, but after watching Tampopo, I was a little vexed, partially because I hated it, but mostly because the only comparable movie that came to-mind was The Road Warrior.

For those unfamiliar with either movie, The Road Warrior is the second film in the Mad Max Trilogy, and takes place after an apocalyptic war has turned everyone into brutal scavengers, fighting for what remains of the world’s gasoline. The remaining civilized people enlist the help of Max (a former cop who lost his family), to guide them to safety. Tampopo, on the other hand, is a comedy about a woman who runs a noodle shop in Japan, but is unsuccessful, so she begs the help of a stranger to help her business succeed.

Aside from the reluctant lone-wolf hero, these movies have absolutely nothing in common, but what could I do, start over with another film? Like most college assignments, I waited until the night before the paper was due to even watch the damn movie. Still, I managed to vomit enough comparisons between Max and Goro (the hero of Tampopo) to bullshit my way through a 2,000 word essay about reluctant heroes. Turning it in the next day, I thought it was probably the dumbest thing I ever wrote for a class, and the professor was gonna think I was an idiot.

To my surprise, I got an A on the paper.

This was an epiphany for me, when I learned that in the world of English, there are no wrong answers. The only way to fuck up an assignment is to either take stories at face-value or scrawl your essay in crayon. As long as your bullshit is articulate, anything you write will be taken seriously. Who's gonna prove you wrong? And extra kudos if you establish a connection between the story and current, real-world, politically-correct issues, even if they wouldn‘t have been even remotely relevant at the time they were written.

In other words, earning an English degree largely requires you to put in-writing the same stuff you used to yak about with friends when passing the bong around. As a former drug user with a keen eye for signs someone else is a drug user, I am pretty sure a majority of my professors still rock & rolled all night and partied every day, looking for symbolism in things which were never created for analysis in the first place. As a free-thinking adult, I now know you can find symbolism and metaphor in anything. 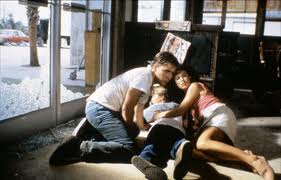 
As evidence, I humbly submit Stephen King's sole directorial effort, 1986's Maximum Overdrive. In the film, after the Earth passes through the tail of a comet, all the machines in the world suddenly develop minds of their own and start trying to kill us. In King's original story, "Trucks," we are under attack by legions of 18-wheelers. But in the movie, even appliances develop insatiable bloodlust...electric knives, soda machines, lawnmowers, gas pumps, ATMs, etc. It is never explained, however, why the characters in the movie are still able to drive their own cars.

Just as Michael Jordan once proved being a basketball prodigy doesn't necessarily mean you can suddenly pick up a Louisville Slugger and swing-away in the Majors, King demonstrated that great writing talent doesn't translate into knowing what the fuck you're doing in the director's chair. As a huge Stephen King fan, I really wanted to love Maximum Overdrive when it oozed into my local drive-in, and declare him the all-time master of terror in all its forms. But alas, it pained me to say Maximum Overdrive was one of the most aggressively stupid movies ever.

Or is it? When I dust off my English major hat, Maximum Overdrive becomes a metaphorically-rich allegory, loaded with symbolism, irony, sexual imagery and cultural commentary. And since writer/director Stephen King isn't here to refute my analysis, whose to say I'm wrong?

The film begins with a goofy looking fellow (played by King himself) trying to withdraw cash from an ATM. Instead, the machine calls him an asshole, while the bank sign overhead repeatedly displays the message, fuck you. This is a commentary on the oppressive power our banking system repeatedly wields at the expense of the middle-class, who are helpless pawns at the mercy of corporate influence.

In the next scene, a drawbridge begins to lift on its own, still loaded with vehicles. While its operators are playing cards and picking their noses, a load of watermelons fly from a truck, smashing through windshields and killing the cars' occupants. For those who don't know, watermelons contain large amounts of citrulline in its rinds, a chemical which expands blood vessels much like Viagra does, thus increasing libido. Hence, the watermelons penetrating these windshields is an overtly violent sexual act. By the way, sexual metaphors go over big in college...professors seem to love anything even remotely phallic. So, for any potential English major reading this, if you can find some hidden dick joke in The Divine Comedy, your degree is assured.

In a blatant example of irony, the film is scored by the heavy metal band, AC/DC, whose very existence depends on electricity (which powers all of these malevolent machines), because they've never performed an acoustic song in their entire career.

The film is rife with social commentary on, not only our consumer culture, but vices which adversely affect both our physical and psychological well-being. The murderous video game, soda machine & ice cream truck are a direct symbols of addiction in the human condition. Here, King is showing us, not only are we slaves to our vices, said-vices will ultimately kill us. On a related note, the scene where a beer truck is blown up with a rocket launcher represents man’s ability to overcome said-vices. As for the toilet paper truck being blown up...hey, hundreds of rolls of flaming tissue raining from the sky is simply fucking funny because, hey, we use it to wipe our butts. Huh-huh.

Rampant materialism is a theme prevalent in George A. Romero’s Dawn of the Dead. King explores this as well, using the Happy Toyz truck (with its Green Goblin grill) as the defacto leader of this machine uprising, and a symbol which poses the question, “Do we own our things, or do they own us?”

King includes some personal values/philosophy in the film as well. By constantly groping the hitchhiker he picks up, the traveling Bible salesman demonstrates the hypocrisy of organized religion. Then there’s the fact that the few remaining characters only manage to survive this ordeal with a cache of illegal weapons found, King’s obvious declaration of his support for the Second Amendment right to bare arms. And, most tellingly, we learn King is an evolutionist, as shown when several characters escape the marauding machines in a sailboat; this symbolizes man’s return to the very waters which nurtured and nourished him before he eventually crawled from the sea during the earliest stages of our evolution. If King were a creationist, God would have simply zapped all these fucking trucks into oblivion with a lightning bolt or something. The movie would have also been only five minutes long.

As for the question of why these characters are still able to safely drive their own cars throughout the entire movie? Well, shit...I’ve got nothing. Forget all that English major bullshit I just said. Maximum Overdrive really is just a dumb fucking movie, with one great scene of a kid being squashed by a steamroller.
Posted by D.M. Anderson at 5:58 PM