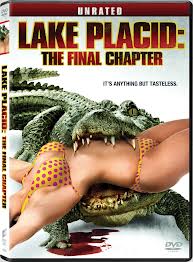 The original Lake Placid was no classic, but great fun watching a fairly respectable cast show up in the kind of movie American-International used to crank out in the 70s, albeit with a much bigger budget. And thanks to a witty script by David R. Kelly, it was arguably the most intentionally-funny monster movie since Tremors. For me, that sense of humor was what set Lake Placid apart from others of its ilk, something lost on the direct-to-TV sequels which followed.

Like the two previous sequels, Lake Placid - The Final Chapter dubiously premiered on SyFy. And, like most of the micro-epics that show-up on that channel each Saturday night, it was filmed on-the-cheap, loaded with crappy CGI, fake gore, scantily-clad teenagers hired for how well they fill out a bathing suit, and peppered with a few token famous faces whose glory days are obviously behind them. And there's nothing wrong with that. If you keep your expectations low, movies like this can offer a goofy good time.

But the problem with this one, as well as the other two Lake Placid sequels, is the original reveled in its own ridiculousness and was never intended to be taken seriously, which is what ultimately endeared it to so many fans of big-budget trash. But here, aside from some admittedly-funny scenery chewing by Yancy Butler (who appeared in Lake Placid 3) and Robert Englund (the Christopher Walken of B movies), the only fun the viewer will derive is in how god-awful it is.

At least when Universal followed up Tremors with straight-to-DVD sequels, the same sense of self-aware humor of the original remained, even if their budgets were obviously smaller. There's no reason why a low-budget Lake Placid sequel couldn't be just as fun (even without Betty White spouting F-bombs). But instead, we get a plot that makes so sense whatsoever, lots of idiotic characters, phony-looking crocodiles appearing out of nowhere to make gory kills when the story starts to lag, and of course, plenty of teenagers ready to get topless. Worst of all, the overall tone is actually kinda serious.

I dunno...to me, the original Lake Placid was above all that. This one plays like it was inspired more by Alexandre Aja's remake of Piranha than its source material, but even Aja's Piranha had a healthy, self-aware sense of humor. As for me, regarding lead actress Elizabeth Rohm, best-known from her stint on Law & Order, the main thing I walked away with from this movie was "This was the best job you could get?"

In the end, Lake Placid - The Final Chapter offers up some gratuitous gore and nudity, and it's always fun watching Robert Englund show up in yet-another movie where he obviously knows how dumb it is. But he's a poor substitute for Betty White's wonderfully-obscene appearance in the original. This film is sadly just another cheap-ass time-killer (destined to appear in Wal-Mart budget bins within a few months) whose makers totally forgot what made the original Lake Placid so fun in the first place.