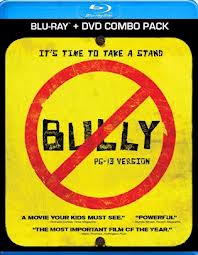 I remember being occasionally picked on in high school by a guy named Bob, a mammoth-sized douche bag from the football team. I never did anything to incur his wrath...I was simply smaller and weaker. I hated Bob, who, for no reason whatsoever, once rammed my chest with the bottom end of a crutch. I wanted to kill the guy, but felt helpless to do anything about it. At the same time, shit rolls downhill in school much like it does in the real word, and I did my share of picking on smaller and weaker kids as well.

While watching Lee Hirsch's somber documentary, Bully, I found myself thinking about one of those guys I picked on, named Dan. I'd call him names, occasionally throw things at him or hide his lunch. So did a lot of other kids. Me and a few friends even egged his house once, for no reason other than good sport. If shit does indeed roll downhill, there has to be someone at the bottom of that hill. Like the kids in this movie, Dan was one of those guys. To me it was just harmless fun, but it must have made his life a living hell. Watching Bully, it made me sick to think I was part of that, because even though I knew how I felt when bullied by Bob, not once did I consider how I made Dan feel.

A lot has been written about this film, mainly that it's something every kid should see. And I would agree with that, but what makes it different than the "bullying is bad" programs they are subjected to in school, Bully offers no statistics, no demographics and, most significantly, no cut-and-dry solutions.

Hirsch wisely provides no narration, forcing us to simply walk a mile in the shoes of several bullying victims, as well as their families (two of whose sons were driven to suicide). We don't witness a lot of bullying per se (other than some cruelty perpetrated onboard a school bus), nor do we always learn why these particular kids became targets. What we do experience is how it affects their lives, as well as their families. Much of it is heartbreaking to watch, especially the families who lost a child and demand to know why their schools were unable or unwilling to take action until it was too late. However, the film is also quick to point out that, although a school must share at-least some responsibility regarding student safety, it is obvious that bullying is a problem that schools alone cannot fix.

What Bully does best is make the viewer feel true empathy for these kids (there's probably one like each of them at every school in the nation). It doesn't preach, scold or place blame. The film simply puts us at the bottom of the hill to let us know what it feels like when the shit hits us...and it hurts. As such, Bully is not a very uplifting film, despite its half-hearted attempt to instill hope at the end by showing parents and victims coming together to create awareness. It's a film everyone should see, but I can't imagine anyone wanting to sit through it more than once. Still, Bully is highly recommended to anyone with middle/high school kids in the house.