THE MATRIX and the Tired Running Gag 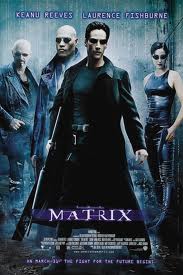 Dave Anderson...that's my name. Well, technically, it's David Anderson, but only my mother and my dog call me David. To everyone else I'm just Dave. It's an incredibly boring moniker, so common that there were two Dave Andersons at my high school, and when I finally began getting novels published, I was forced to go by the title of D.M. Anderson because there were already several authors out there with my name.

I blame my parents. Anderson is a dull enough surname, so the least they could have done was give their boy a more exciting first one...something like Clint or Max or Batman. Anything but Dave; that's as generic as Bob.

Growing up, I suppose it could have been worse (such as actually being named Batman). Any kid with a truly unusual name was automatically knocked down a wrung or two on the social ladder, and if said-name sounded a lot like a bodily function, you were screwed. I went to school with a kid named David Snodgrass, so of course all us empathetic classmates rechristened him Snotgrass. And as we grew older and bolder in our use of expletives, he was sometimes referred to as David Snot-Ass (it made no sense, but we thought it was funny).

Then there are those parents, either because they are totally high or hate their child before it even squirts from the womb, who go out of their way to saddle the kid with the stupidest fucking name possible, like Dusty Storm, Rana Shore or Donald McDonald (all kids I knew in school). I even read somewhere recently of a couple (obvious metal fans) who named their daughter Metallica. Yeah, nice. Way to fuck-up your kid’s self-esteem in advance. People like this provide a strong argument for requiring would-be parents to undergo a competency test before being allowed to spawn.

Naming your child is a big responsibility, for they are the ones who have to live with your decision. When it came to my own daughters, my wife and I toiled endlessly before settling on names which were somewhat unique, but not so fucking weird that they’d be subjected to stupid jokes from their peers.

That’s easier said than done, because sometimes shit can happen in the real world which suddenly renders your once-common name into a joke. As a middle school teacher, I've seen all kinds of weird-ass titles parents have bestowed on their children...on purpose. But one year, I had a student named Austin Powers, who was born long before those movies came out, but by the time he was in my class, that name was the source of endless jokes and comments from his peers. I don’t think a single day went by that he didn’t hear some dumbass get in his face and roar, “Yeeaah, baby!”  Austin was always good-natured about it, but hearing the same shit every day had to be irritating after awhile. I know because I experienced it to a lesser extent when The Matrix became a pop culture phenomenon in 1999.

The movie was, of course, technically groundbreaking and monumentally influential on the action genre. Even today, you see a slew of onscreen tricks in countless action flicks which were first dreamed-up by the Wachowski Brothers for The Matrix, a film with an intriguing concept that, coupled with its visual dynamics, made it completely unique for its time. The look and style of this film has been endlessly imitated and satirized ever since. It also appealed to a lot of seventh graders at my middle school, as did a two-word line of dialogue, malevolently uttered by the film’s villain, Agent Smith....

Being that I’m known to students as, not Dave, but Mr. Anderson, that following fall I was endlessly subjected to kids coming to me with a shit-eating grin and hissing “Missster Anderson”. It was funny for awhile, but like all jokes, you can only hear it so many times before you want to start handing out detention slips. Still, that didn’t stop kids from doing it ad nauseum, all with that same self-congratulatory face as though they were the very first to drop that pop culture reference on me.

As The Matrix slowly receded from current relevance, so did most of the “Missster Anderson” jokes, though even today, they still pop up from time to time. It could be worse, though. The Matrix jokes related to my name will eventually die off completely, but I can’t even begin to imagine what it would be like to be a normal guy trying to get through life with a name like Charles Manson.
Posted by D.M. Anderson at 5:53 PM