FLASH GORDON and the Rude Awakening 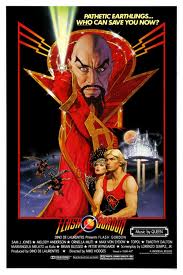 There was once a time (as a kid) when I couldn't stand my little sister. She was annoying, a constant bane to my existence and impossible to get along with. Why? Because she was my sister, of course, so all she had to do to incur my contempt was breathe. Since the difference in our ages was only two years, I know the feeling was mutual. In other words, we had a normal sibling relationship.

I always did my part - required from all older brothers - by making sure my friends couldn't stand her either...a little sister...eeew. Keep it away or it will infect us all! My parents were often ignorant to the dangers of inter-sibling fraternization, as demonstrated when they'd sometimes force me to include this wretched spawn in my playtime activities, even when me and my friends had no room for her. I've since developed a similar parental ignorance to such danger, having forced my oldest daughter to play Barbies with her kid sister numerous times, even though her face told me she'd rather shit glass.

Of course, times change and people grow up, as did my sister and I. But because of our relative closeness in age, the transition to young-adulthood proved to be somewhat sobering in how we viewed our friends, as well as each other.

Shortly after I got my driver's license, me and my two best friends, Rick and Clay, decided to go to the Foster Road Drive-In to catch Flash Gordon, an intentionally campy update of the film serials from the 1930s, and a movie that never would have seen the light of day if it weren't for Star Wars. The main reason I wanted to see it was because the music score was by Queen, a band I loved who were huge at the time. Anyway, just before we were about to pile into my VW Bug, Mom insisted I take my sister along while she and Dad went out to the greyhound races. This sudden change in plans deflated me like a balloon.

Arguing with my mom was pointless (since technically, my parents owned the car), so off we went...me, Clay, Rick and my fucking 14 year old sister. Granted, she wasn't quite the pariah she was when I was ten; we were now attending the same high school and knew a lot of the same people, but that didn’t mean I suddenly viewed her as an equal. Like so many times before, she was a fifth wheel.

Anyway, we got to the drive-in and found a decent spot, Me & Clay in front, Rick and my sister in the back. Once the movie finally started, I temporarily forgot that she was tagging along...

Flash Gordon is a silly film with cheesy special effects, hammy acting and corny dialogue. But what makes it kinda fun is it’s silly, cheesy, hammy and corny on purpose. It goes out of its way to make you roll your eyes and laugh at it, and Queen’s equally-campy score is more-than-fitting.

I don’t think everyone got the joke, since it tanked at the box office. Maybe it tried too hard to emulate the unintentionally-campy stuff stoners used to make fun of at midnight movies. Maybe the fact it was trying to be bad turned a lot of people off. I do remember hearing kids at school scoffing at how stupid and fake it was compared to Star Wars. I also remember thinking the best special effect in the movie was Ornella Muti (who plays galactic femme fatale, Princess Aura). If she was tacked on my bedroom wall in high school instead of the Dallas Cowboys Cheerleaders, I’d have gone through a lot more hand lotion.

Anyway, I thought the movie was okay. I got the joke. So did Clay, but I don’t think Rick or my sister did. In fact, they may not have even noticed the joke, because about halfway through the movie, Clay nudged me in the ribs with a shit-eating grin and cocked his thumb toward the backseat. I looked back to see the two of them making out.

I couldn't believe it...Rick, one of my best friends, sucking-face with my sister, the same little urchin we used to kick out of my bedroom by calling her names and throwing shoes at her!

I wasn’t angry or anything, but I was a little grossed out. I knew my sister was 14 and hardly a Girl Scout, but as her well-adjusted older brother, her appeal to the opposite sex was totally lost on me. And until that night, I also assumed her appeal was lost on those in my inner circle...like Rick.

I didn’t know whether to laugh or cry. What I did do was bark, “Hey, whattaya doin!”, which startled them apart. They scooted as far to the opposite sides of the backseat as my tiny VW would allow, looking embarrassed. Clay laughed his ass off.

We resumed watching the movie, but not even five minutes went by before I got another nudge from Clay. I turned around. They were at it again...macking on each other like leeches! If my car was equipped with a firehose, I’d have turned it on them.

Anyway, I was kinda weirded out. To me, my sister was still the same little brat with a Pebbles Flintstone hairdo who I always called ‘Becky the Boob’ when we were little. To see her and Rick necking in the backseat was almost surreal, especially since none of my friends ever gave any indication they thought of her as anything but a pill. And no, I wasn’t mad at Rick, but I did seriously question his taste in girls. Yeech!

I never brought it up afterwards, though I briefly considered mentioning it to Mom just to irk my sister. But at the time, she and I had enough dirt on each other to assure we’d both be grounded for about a thousand years if such scandalous incidents were made public (our sibling version of Mutually Assured Destruction), so I wisely chose to let it go.

Today, I don’t know if my sister remembers that night or not. Maybe I’ll ask her sometime. It was so long ago that she’d probably reply, “Rick who?”
Posted by D.M. Anderson at 10:18 PM