DEAD ALIVE (a.k.a. BRAINDEAD): A Strike to the Balls 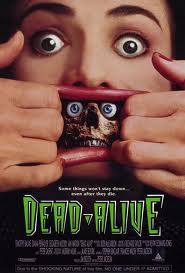 Jackson also used to make nasty-ass gore movies aimed right at your gag reflex, but were so over-the-top and funny that it was impossible to not to laugh at the total absurdity of it all. This is why I had no problem sitting down with my youngest daughter, Lucy, for our usual Friday night horror-fest to watch Dead Alive (known as Braindead to the rest of the world), even though the movie is widely considered to be one of the goriest movies ever made.

First of all, Lucy is my seasoned little horror buddy with a good head on her shoulders, meaning she knows when something onscreen is real or not. As such, movie gore doesn’t really phase her (unless it involves the eyeballs). Second, Dead Alive is not-so-much a horror movie as it is a Pythonesque comedy, like a long version of the duel between King Arthur and the Black Knight in Monty Python and the Holy Grail. While the blood-free Insidious totally freaked Lucy out, Dead Alive made her giggle.

Still, I got into a bit of hot water with my wife, Francie, the next day. Not because of the extreme violence, but because of the language Lucy used to describe her enthusiasm for it: “It was gross and funny and one guy kept getting kicked in the balls!”

Francie has the gift of the Spock Eye, where she calmly looks my way and raises a single inquisitive brow, which usually means I just fucked up. Totally not approving of Lucy’s mention of male genetalia, I got the big time Spock Eye. I applied my usual tactic in these situations...I threw my hands up and replied, “What?”

Francie ignored my defense and regarded Lucy. “Balls? Where did you hear that word?”

Francie shot yet-another Spock Eye my way, at which time I became a bit curious myself about where Lucy learned what balls are. Even though folks do indeed get kicked in the nuts in Dead Alive, I’m pretty certain the term ‘balls’ was never mentioned. I'm also pretty sure I never defined it for her, because even though I have no problem spending Friday nights watching all kinds of bloody mayhem with my youngest kid, the idea of anything related to genitals was way beyond my comfort zone. She must have heard the term at school from someone.

But later, when she and a friend were roughhousing in her room and Lucy barked out, “Hey, you got me right in the balls!”, it was instantly obvious she still didn’t actually know what they were. To her, it obviously referred to anyone, regardless of gender, being kicked in the nether-regions. But was I going to correct her at that time? I may be fairly liberal on what I choose to expose my children to, but Lucy does not yet need to know the gruesome specifics of the male anatomy.
Posted by D.M. Anderson at 8:53 PM