THE BIG BUS: A Forgotten First 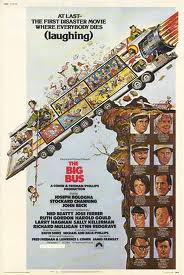 1980's Airplane! was a watershed comedy. Sure, there had been plenty genre satires before, mostly notably Mel Brooks' Young Frankenstein and Blazing Saddles, but they were always presented with a knowing wink and a nudge to the ribs. Airplane!, however, played a like a straight-faced drama (right down to the film score), featuring a cast of actors not normally associated with comedy, which made everything even funnier. It was like an issue of MAD Magazine brought to life. Like that magazine in its prime, the gags came so fast and furious, subtle and not-so-subtle, that it was impossible to catch them all with a single viewing.

Airplane! was groundbreaking, and we've been feeling its influence in countless genre parodies ever since, some good (The Naked Gun, Hot Shots!), some not-so-good (Scary Movie) and most  downright shitty. What makes Airplane! the definitive movie satire is it was presented with the same pseudo-seriousness as the very films it parodied, something lost these days with hacks like Jason Friedberg & Aaron Seltzer who simply assume showing Willy Wonka breakdancing qualifies as satire. Today, we go into these films knowing the formula, and almost challenge them to make us laugh. Back in 1980, we are caught off-guard.

But as influential as Airplane! was, it wasn’t the first disaster movie parody. It actually wasn't the second, either. The second was Drive-In, a piece of low-budget junk which aspired to be another American Graffiti, but also prominently featured a movie-within-a-movie "Disaster '76," a crude little parody which is the sole reason for anyone today to seek this film out.

The first true disaster satire was Paramount's The Big Bus, released the height of the craze in the mid-70s, whereas Airplane! came out after the genre itself had already degenerated into self-parody. The Big Bus isn't better or funnier, but it is presented with a similar straight face, and may actually be a more dead-on satire of a single genre.

Airplane! used the disaster storyline to skewer numerous classic films, cliches, TV shows, caricatures & pop-culture icons, meaning one didn’t need a working knowledge of genre conventions to appreciate it. Hell, the amount of goofy word-play and silly puns alone was enough that anyone watching Airplane! would still laugh their asses off, even if they’d never seen a single disaster film in their entire life.

While there are a few scenes which look like something lifted from a Mel Brooks movie, for the most part, The Big Bus is exclusively a parody of disaster film cliches...it even looks more like a classic disaster film than Airplane!, and this is probably why it tanked at the box office.

Aside from the fact it isn’t always laugh-out-loud hilarious, the success or failure of a movie like this depends on a majority of the audience coming in with a built-in knowledge of everything ridiculous about a genre  which, in 1976, hadn’t completely played itself out yet (this was still before Airport ‘77, The Cassandra Crossing, Airport ‘79, Hurricane, When Time Ran Out, Meteor, The Swarm, Avalanche and slews of TV knock-offs had yet to milk disaster for all it was worth). As such, The Big Bus might have been too clever for its own good at the time, a straight-faced satire of a genre which was still massively popular. Now that I think about it, considering its obviously big budget, The Big Bus was a pretty risky movie to make at the time.

The movie came and went in my hometown with no fanfare, playing for a couple of weeks at the Bagdad Theater before disappearing. As a card-carrying disaster movie fanatic, weaned on two Airport movies, The Poseidon Adventure, Skyjacked, Earthquake and The Towering Inferno, I managed to talk my parents into dropping me off to see it, where I was one of three people in the entire theater.

I’d already seen Young Frankenstein and Blazing Saddles, but The Big Bus was the first movie that satirized a genre I was very familiar with. As such, I found it quite amusing. The whole idea of a ridiculously-equipped nuclear-powered bus (the worst form of public transportation) being given a sci-fi upgrade is inherently funny, not to mention the utter seriousness of the characters involved in its creation. As for the main characters, they are truly priceless, mainly because it isn’t a stretch to imagine them popping up in a serious disaster movie. Yeah, there are some out-of-place moments of broad comedy that prevent the movie from reaching the satiric heights of Airplane!, but at the time, such a straight-faced film skewering a single genre must have been something Paramount did not know how to market, so they simply threw it out there and hoped for the best.

In the long run, Airplane! is a far funnier film, but The Big Bus is arguably a more accurate satire of the genre, and today, probably only appreciated by those (like me) who grew up in the 70s with the movies it parodies.
Posted by D.M. Anderson at 5:28 PM