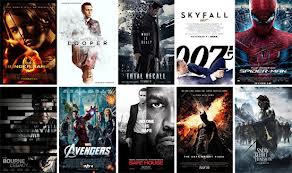 Every website and blog dedicated to movies trucks out their annual year-end lists, so why should FKMG be any different? We tried to do something a little different than the usual best and worst, especially since we spend most of our time on this site living in the past. At any rate, here's our 2012 year-end wrap up of the good, the bad and the ugly...

WORST TREND, PART 1: Adapting single novels into two or three separate movies to milk maximum profits from gullible suckers obviously happy to pay twice the price for a single story. Gone with the Wind was over a thousand pages long. No one had trouble adapting that into one movie.

BEST AUDIENCE-ROUSING SCENE: Hulk beats the living shit out of Loki in The Avengers. What a puny god.

BEST WTF? ENDING: The Dark Knight Rises. Did Batman/Bruce Wayne really escape that nuclear blast at the end of the movie, or did Christopher Nolan just create the biggest film fuck-up of all time? He's not saying...and I wouldn't either.

FOR CHRISSAKES, JUST DO ANOTHER MISSION: IMPOSSIBLE MOVIE!: Tom Cruise in Rock of Ages and Jack Reacher.

BEST MOVIE THAT LEAVES ABSOLUTELY ZERO ROOM FOR A SEQUEL: The Cabin in the Woods. Anyone coming up with a follow-up to this one is either a story genius or greedy as hell.

MOVIES THAT WERE BETTER THAN THEY HAD A RIGHT TO BE: Ted, The Amazing Spider-Man, Wreck-It Ralph, 21 Jump Street.

BEST MOVIE NEWS: 1. Disney buys LucasFilm and immediately announces a new Star Wars trilogy. 2. They will not be made by George Lucas. 3. They've already hired Lawrence Kasdan (who co-wrote The Empire Strikes Back) to work on the script for the first one.

SADDEST MOVIE NEWS: 1. The Aurora shooting during the midnight premiere of The Dark Knight Rises. 2. Charles Durning, one of the all-time great character actors, passed away on Christmas Eve. 3. Spike Lee continues to be a self-righteous dick, condemning Django Unchained without actually having seen it.

JUST BECAUSE YOU CAN DOESN'T MEAN YOU SHOULD: Peter Jackson shot The Hobbit in 3-D at 48 frames per second, making it like an episode of General Hospital.

BEST PROOF THAT NOT EVERY BRAND NAME SHOULD BECOME A MOVIE: Battleship, John Carter, The Lorax, The Three Stooges.

BEST FAMILY MOVIE THAT SHOULD HAVE BEEN HUGE: Rise of the Guardians

BEST SEQUEL NOBODY ASKED FOR: Resident Evil: Retribution. More of the same, but what the hell...it was fun, and what were you expecting anyway? You don't go to McDonald's for steak & lobster, do you?

WORST SEQUEL NOBODY ASKED FOR: Paranormal Activity 4. Yet another once-decent idea run into the ground. Speaking of which...

ENOUGH ALREADY!, PART 2: Reboots. What a stupid term. Just because you're starting over before the corpse of the last franchise entry is even cold doesn't mean it isn't a remake. Speaking of which...

QUIT WHILE YOU'RE AHEAD, PART 2: Dear Mr. Ackroyd...no one gives a damn about Ghostbusters 3 if you don't have Bill Murray. Didn't Blues Brothers 2000 teach you anything?

BEST MOVIE WITH THE MOST PLOT HOLES: Prometheus

BEST EXAMPLE NOT ALL MOVIES AIMED AT TEENS ARE STUPID: The Hunger Games

BEST BRUCE WILLIS MOVIE (OUT OF THE DOZEN HE DOES EVERY YEAR): Looper

BEST MOVIEGOERS: Those who go to midnight premieres in order to be the very first to see a film. Their dedication thins the crowd for those who prefer to see it at a more reasonable hour.

WORST MOVIEGOERS: 1. Those who unconsciously narrate what they're watching. 2. Those who bring children to R-rated movies. 3. Any asshole who still whips out their cell phone at any time in the theater, even if the film hasn't started yet.

BIGGEST ASSHOLES: The NRA, who claim movies and video games empower nutjobs to go on killing sprees, not the arsenals stashed in their homes.

BEST TRAILER FOR A 2013 MOVIE: World War Z...Brad Pitt vs. zombies. Even though it doesn't appear to be too faithful to Max Brooks' novel, this looks all kinds of awesome.

BEST SPECIAL EFFECTS: With all due respect to The Hobbit, The Avengers, Life of Pi and Cloud Atlas, the effects in Ted were the most convincing; we really felt like we were watching a pot-smoking stuffed bear.

BEST SIGN THAT EVERYONE IS FINALLY SICK OF ADAM SANDLER: That's My Boy

BEST UPDATE OF A MOVIE WE CAN'T WAIT TO SEE: The fan-shot photo of Tom Hardy as Max in Mad Max: Fury Road.

MOST WELCOME RETURN: Daniel Craig as James Bond in Skyfall, Robert Zemeckis' first live-action movie in over a decade (Flight).

LEAST WELCOME RETURN: Barbra Streisand in The Guilt Trip, Mel Gibson in Get the Gringo, Billy Crystal in Parental Guidance.

BEST MOVIE ALMOST NO ONE WATCHED: Killing Them Softly

BEST MOVIE EVERYONE FEELS OBLIGATED TO SEE BECAUSE IT'LL PROBABLY BE NOMINATED FOR A BILLION OSCARS: Lincoln

ACTOR MOST-LIKELY TO HAVE A RESPECTABLE CAREER NOW THAT THE TWILIGHT SAGA IS OVER: Robert Pattinson

WE ALREADY KNEW YOU COULD ACT, BUT WOW, YOU'RE KIND OF A HOTTIE, TOO: Anne Hathaway in The Dark Knight Rises.

WE THOUGHT YOU WERE AN ASSHOLE, BUT IT TURNS OUT YOU'RE AWESOME: Christian Bale shows up at the bedsides of those injured in the Aurora shooting at the premiere of The Dark Knight Rises.

WHO KNEW?: Having directed one good movie (Gone Baby Gone) and two great ones (The Town, Argo), looks like we were all wrong about Ben Affleck. The prospect of him directing The Stand now sounds pretty cool.
Posted by D.M. Anderson at 3:25 PM