2012 and the Problem with Expiration Dates 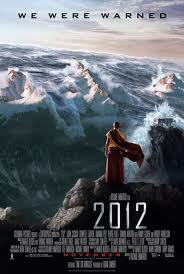 Today is December 21, 2012. The end of days according to the Mayan calendar. Of course, we're still here. No solar flare erupted to heat up Earth's core; no cataclysmic tidal waves; no super-volcanic eruptions. I haven't watched the news yet today, but I'm pretty certain L.A.didn't slide into the sea either.

I'm glad we're all still here, mainly because season three of The Walking Dead isn't over yet. On the down side, though, it looks like I'll have to retract the letter of resignation I submitted to my boss, which may not be easy since it consisted of only two words: suck and it.

Despite the plethora of doomsday documentaries popping up on the History Channel over the past few weeks (maybe it should be called the We're History Channel), I don't think too many folks spent sleepless nights worried about 12/21/12. If that were true, most of us would have spent yesterday crapping ourselves on an hourly basis. Doomsday years have come and gone over the centuries, and I'm looking forward to the next predicted one. Personally, I'm putting my money of 2036, when there's a giant asteroid out there which has the remote possibility of hitting us (really, look it up). We love watching ourselves die as a species, and director Roland Emmerich has made a decent living showing us our possible extinction.

But as entertainment, the end of the world is always fun.  My personal favorite of his is The Day After Tomorrow, which may play fast and loose with science, but comes across as at-least being plausible.

But that was just a warm-up for 2012, arguably the mother of all disaster movies. It's spectacular depiction of our global demise reaches orgasmic levels every fifteen minutes or so, making Armageddon look like a Saturday night, SyFy channel cheesefest. It's also the funniest disaster movie since Twilight. Only a movie like this would have a limo driver/failed author (John Cusack) repeatedly out-run volcanic eruptions, catastrophic quakes and save his family to safety by steering a sports car from the rear of a crashing plane. Only a movie like this would have us believe entire continents could shift halfway around the world in just a few short days. Only a movie like this would let Woody Harrelson steal the entire movie right out from under everyone else's noses.

Its title and timing couldn't have been more perfect. Playing off the hype and speculation surrounding the Mayan calendar (which was becoming part of the public consciousness back in 2009), 2012 was ingeniously marketed, even though the title really has nothing to do with the story at all. The movie could have taken place during any year. It is obvious 2012 was intended to be relevant back when its title date was still the possible future.

The problem is time always marches on, and this ominously-titled epic has passed its expiration date. This possible future is now our past. I understand why the makers of 2012 did what they did, but at the same time, part of me wonders why they gave it such a short expiration date. Maybe they knew their movie was nothing more than easily digestible crap and never created to stand the test of time. And that's fine, I guess, but it has me wondering why any filmmaker feels the need to set their speculative sci-fi during a specific year.

For example, when Stanley Kurick collaborated with Arthur C. Clarke to write 2001: A Space Odyssey, is there any real reason an actual date needed to be incorporated into the story? 2001 came and went and we, as a species, still haven't managed to travel beyond the moon. The movie was based on Clarke’s story, "The Sentinel," a timeless title that, if the film was named as such, newbies watching it wouldn’t think of it as a product of its time. Think about any film depicting a specific year in the future...does knowing the year make it better? And when that future date comes and goes, doesn't it - even a little bit - make said-film sort-of a relic, regardless of how awesome it is?

Alas, there's something just a little bit sad when any future depicted in a film eventually becomes the distant past. It makes me ominously aware of just how fast time really passes. The urban hellhole of Escape from New York was set in the distant future of 1997...sixteen years ago. Hell, I still fondly remember seeing it in 1981 like it was yesterday. On a related note...still more expiration dates of modern classics are fast approaching, such as Soylent Green (2022), Back to the Future II (2015) and Blade Runner (2019).

So, considering the whole Mayan calendar angle has nothing to do with the events in 2012, I’m still surprised the filmmakers would place an early expiration date on a film which must have cost more cash than every disaster movie ever made. Why not let the future be more ambiguous? Why not make sure your movie seems timely and relevant several years later?

As it stands, 2012 is still fun, still as unintentionally funny as ever. But as of now, on 12/21/12, the movie is now part of our collective past. From today on forward, anyone seeing it for the first time will look at it the way I first watched movies like Forbidden Planet, which showed mankind first-venturing into space “in the later half of the 21st Century.”
Posted by D.M. Anderson at 2:43 PM