EVENT HORIZON and a Tale of Two Bowlers 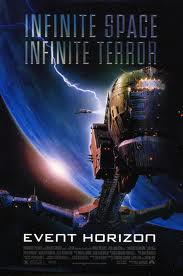 After my dad retired, he decided to dedicate much of his spare time to bowling, a game he’s always loved.

Back in his younger days, he was good enough to participate in regional tournaments throughout the northwest (in fact, I think that's how he first met my mother). Like a lot of us, though, the game eventually had to take a back seat to bigger responsibilities. His beloved bag & ball sat in the back of his closet most of the time, only taken out on those rare occasions when bowling was part of his kids’ birthday plans. But now, comfortably retired with both kids out of the house, he’s re-embraced the game with state-of-the-art equipment (including a wrist-brace that looks like a sci-fi weapon) and a serious commitment to improving his skills. And, damn, he's good. The guy can make the ball hang at the edge of the gutter forever before it hooks to blast through all ten pins like a weed whacker. More often than not, his scores are in the 200s, and there was even one time not too long ago when he missed a perfect game by only one strike.

I enjoy bowling too. The difference is I suck. A good game for me means breaking 100 or at least avoiding a gutter ball. I’m clumsy, have no form, can’t put any spin on the ball and often fall on my ass during my release (much to the amusement of those I‘m bowling with). Still, there are rare occasions when I play well enough to convince myself I’m pretty good. Hell, there was one family outing when I threw enough strikes and spares to actually beat my dad (which must have killed him, since everyone knows he’s the best bowler in the family). But honestly, I have no fucking idea what I did to rack up such a score. It was just luck, of course, because Dad got his groove back for the second game that night and slaughtered everyone by over a hundred pins.

I guess you could call my dad the Ridley Scott of the bowling world. Even though he’ll never be Dick Weber, Dad’s skills are obvious to anyone watching. Similarly, Scott’s a very good director, and even though he’s no Spielberg, he’s made enough great movies that when he makes bad ones (like A Good Year, G.I. Jane and Robin Hood) we don’t reassess his abilities. So, if my dad is bowling’s Ridley Scott, that must make me the sport’s Paul W.S. Anderson.

Paul W.S. Anderson is, for the most part, a shitty director who makes shitty movies, a lot of them based on video games. He’s never had an original idea of his own, and most of the tricks in his bag he ripped off from better directors. He’s probably most-famous for the Resident Evil franchise (directing three of them), diluted zombie movies for undemanding mallrats. Those movies play like the video games they are based on. In fact, most of Anderson's movies play like video games. For the most part, he's shown no growth or improvement as a filmmaker (just like my bowling game). Each new film is no better or worse than his others...except one.

Anderson's third film, Event Horizon, is his equivalent to my single awesome bowling round, and Citizen-fucking-Kane compared to all of the other movies on his resume. It’s also one of his only films that isn’t a remake, video game adaptation or based on a comic book. That’s not saying it’s monumentally original; Event Horizon draws a ton of obvious inspiration from other films, Alien and The Shining in particular. But since when has originality really mattered? After all, nobody cared that Speed was simply Die Hard on a bus.

The year is 2047 and the crew of the rescue ship, Lewis & Clark, are assigned to venture out to Neptune to investigate the sudden reappearance of the Event Horizon, a ship built to create its own black holes in order to travel faster than light, but inexplicably disappeared seven years earlier. Accompanying the crew is the ship’s designer, Martin Weir (Sam Neill), who’s obsessed with finding out where it’s traveled. None of the other crew, especially Captain Miller (Laurence Fishburne) care about all that...they just want to rescue any survivors and get the hell back home. There are no survivors, however, and the ship itself, having returned from a dimension beyond anyone’s rational imagination (presumably Hell), now seems to be a living, evil entity that wants to take the Lewis & Clark crew back to where it returned from.

Storywise, Event Horizon is somewhat simplistic, disjointed and ambiguous, but what it sometimes lacks in narrative it more than makes up for in tone. This is a deliberately paced, creepy-ass movie that establishes a feeling of dread in the very first scene and maintains it throughout. This is also arguably the first movie since the original Alien that makes space seem like a shitty place to be, especially since the crew of the Lewis & Clark have traveled way too far into the outer reaches of our solar system for their own good. And unlike every other Anderson film, there’s a lot of attention paid to the characters themselves. We learn enough about each one that, when something horrible does happen to them, their fate has more impact.

In addition, the movie simply looks scary. In terms of establishing a mood, it may be the best looking sci-fi/horror movie since Alien. The Event Horizon itself is an ominously creepy ship and becomes character in its own right, just like the Overlook Hotel in The Shining.

Sure, there are plenty of the usual horror tricks (false scares, gratuitous gore, and a little too much exposition at the end), but you could place such accusations on most horror movies. My point is Event Horizon may not be a classic, but it is the one movie where Paul W.S. Anderson displayed skills as a true filmmaker to create something dark, moody and foreboding without dumbing things down for the video game crowd. Like my awesome bowling round where I beat my dad, he hasn’t done anything worth a shit since, meaning Event Horizon was either a happy accident, or he just stopped giving a damn once the Resident Evil movies inflated his bank account. Personally, I’d like to think it’s the former, because even now, whenever I go bowling, I aspire to reach the same glory as that one time I beat my dad, the game’s Ridley Scott. I like to think I still have another great game in me, even if I have no idea how to achieve it.