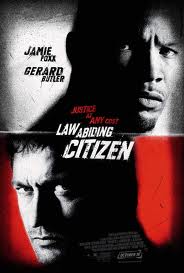 I should probably start by saying I really liked Law Abiding Citizen. No, it ain’t a great film, but it may be my favorite guilty pleasure since Harley Davidson and the Marlboro Man. It is without-a-doubt the best revenge fantasy I’ve ever seen.

But the problem is I don't think it was meant to be a revenge fantasy. For me, the movie is rousing for reasons its makers probably didn't intend.

Gerard Butler plays Clyde Shelton, a family man who’s the victim of a home invasion, and brutally stabbed before seeing his wife and daughter violently murdered. The perps are eventually caught, but the one who did all of the raping and killing cuts a deal with District Attorney Nick Rice (Jamie Foxx) for a commuted sentence, which sends his hapless accomplice to death row. Right from the get-go, Rice comes across as an ambitious & cocky lawyer who’s more concerned about his conviction percentage than true justice, or the happiness of his own family.

Fast forward ten years, and Shelton begins knocking off everyone associated with the case in a variety of creatively outlandish ways. Even after he willingly surrenders to authorities, the slaughter continues. Rice and the police try their best to thwart him, but Shelton is continually one step ahead. He must have some kind of psychic talent to always know exactly when and where his next targets will be, long before they even get there. For example, there must be at least a few dozen cemeteries in the tiny burg of Philadelphia, but Sheldon knows exactly where his most recent victim will be buried so he can kill his next target. And how exactly does he manage to get-hold of a judge's cell phone in order to install the explosive that tears half her head off? Then there's the ridiculous revelation which explains how Shelton managed to kill all these folks while in prison. But we're not supposed to get hung-up on lapses in logic, and for the most part, I didn't. That's not the problem with the movie anyway. I enjoy wonderfully-dumb cat & mouse thrillers as much as the next guy.

The problem is, after the brutal opening scene where Shelton's family is killed and justice is not served, we totally sympathize with him. But later, the movie does an about-face and tries really hard to establish him as the villain, a super-intelligent cross between Hannibal Lecter and John Kramer. By this time, however, it's too late...I've already chosen sides. Unlike other movie villains we root for because their evil is so entertaining, I just can't bring myself to see Shelton as the bad guy at all. He watched his family raped and murdered, was betrayed by his lawyer (the movie's hero) and his assailant got off practically scott free. Fuckin' A, he's gonna want revenge.

When Shelton starts his vengeance, I loved seeing his victims get what they deserved. Maybe it's the husband and father in me, but I'd want to dismember the asshole to took away my family, I'd want to get even with everyone who got him off the hook, and I'd sure as hell want to torment the lawyer who was supposed to give me justice. And I'd probably be crazy enough not to care about any collateral damage I caused. Most of all, I'd want to get away with it and spend the rest of my life content in the knowledge that I avenged my family by making the right people suffer. So yeah, the whole time, I rooted for Shelton the way we all rooted for Rocky Balboa to knock out Apollo Creed.

Maybe I would have seen it differently if the Nick Rice character was at least likable, but he's arrogant, somewhat indifferent to Shelton's pain and seems more concerned with his job than his own family. After Shelton mails a video to Rice's house showing the slow torture of his first victim, which is first viewed by his daughter, all Rice does (over the phone) is instruct his terrified wife to tell the girl it was just a horror movie. I don't know about you, but if a super-intelligent psycho was able to find my family that easily, I'd have dropped everything and ran home to get them the hell out of the house.

There simply isn't much effort made to make me care about Rice. And just because Shelton's revenge is brutal doesn't mean it's necessarily wrong, especially since it's the movie's 'hero' who let him down in the first place. At the climax, there's a twist which is obviously intended to be an audience-rousing gotcha, but all I wanted was for Shelton to finish the job he set-out to do. For me, he is every bit the hero that Paul Kersey was in Death Wish...only with better weapons.

I dunno...is it me? Am I the one who's wired wrong, or did the makers of Law Abiding Citizen epically fail by making its victim and villain the same guy? I guess it doesn't matter, since I'm probably over-analyzing a movie that shouldn't be scrutinized too deeply to begin with. It kicks-ass anyway, and if I'm cheering for the wrong guy, so be it.
Posted by D.M. Anderson at 5:04 PM