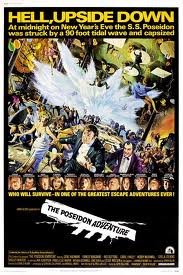 New Year's Eve used to be a big deal. Well, not-so-much a big deal as an excuse to get completely shitfaced and engage in the type of douchebag behavior I would never dream of any other time unless it was a college road trip or bachelor party. Back then, New Year's Eve was one of the best days of the year, meaning New Year's Day ended up being one of the worst, though not quite as bad as those poor souls onboard the SS Poseidon.

After I met Francie (my future wife), I still celebrated the new year with similar hubris, and even though I'd still wake up with dry heaves and a pounding skull, at least I no longer had to try and remember the name of the person I woke up next to.

In the years after Francie and I got married, the novelty of going out and partying on New Year's Eve slowly began to wear off. At first it was because we couldn't find anyone to watch our kids, but eventually it was because we'd rather spend that time with them. When my oldest daughter, Natalie, was around nine or ten, me and her started ringing in the new year by watching SyFy's annual Twilight Zone marathon (Francie was usually in bed by then...it's been several years since she was even awake at the stroke of midnight).

But, alas, Natalie has outgrown TV nights with Dad, and Lucy (my youngest) is more into zombie flicks and Spongebob Squarepants than classic Rod Serling. So of late, I've spent the turning of the new year alone.

Well, not quite alone. I've since started my own little tradition of watching The Poseidon Adventure on New Year's Eve.

This movie was the real start of the 70's disaster movie trend, laying the blueprint which would be followed by subsequent films: a brief set-up, then the big crisis, followed by various Hollywood stars forced to deal with the dilemma, half of whom will die. While 1970's Airport had some elements of the disaster formula, the main focus was on various characters and subplots. Not so with The Poseidon Adventure, which skips most of the formalities and gets down to the business of killing people. The real stars of the movie are the special effects team and set designers; the film looks great, and while the effects may seem a bit quaint in the wake of Titanic, they are still pretty impressive.

The story is a simple one: On New Year's Eve during her final voyage, the SS Poseidon is hit by a massive tidal wave which capsizes the ship. Most of the passengers are in the ballroom celebrating the new year, and when the wave hits, they are tossed about like rag dolls, falling through glass, getting squashed by tables, pianos, dinner carts, etc. The few survivors, led by Reverend Frank Scott (Gene Hackman), must now make their way through the capsized ship to reach the hull and hope for a rescue before it sinks for good. It ain't a great film (if you don't agree, you haven't seen it lately), but if you can get through the laughably bad first thirty minutes, The Poseidon Adventure offers a guilty good time, with such destructive thrills as underwater explosions, passengers getting pummeled by torrents of water, and Shelley Winters' dress hiking up to reveal her massive underpants (during which time you’ll want to gouge your eyes out).

The movie also introduces several elements to the disaster formula that would become standard in later films: the character who exists solely to contradict every idea the hero has; the Oscar-baiting song interlude; the “company man” whose obsession with the bottom-dollar threatens everyone; dozens of extras whose collectively stupid behavior in the face of danger kills them all; the couple who falls in love (or rekindles their love) just before one of them dies; the totally obnoxious kid you wish would die but almost never does.

Just to show you how dull my New Year's celebrations have become, I don't simply pop The Poseidon Adventure into my Blu-Ray player and kick back; I wait until exactly 11:35:19 PM on New Year's Eve. I've timed it so when the clock strikes midnight in my living room, it's midnight on the Poseidon, because it happens 24 minutes and 41 seconds after the movie starts (right when the disaster hits). While my neighbors are outside lighting firecrackers or banging pots & pans, I'm watching an ensemble cast experiencing a much worse New Year's Day than I am.

Sure, there are more exciting ways to ring in the new year. Thirty years & twenty pounds ago, if someone showed me how my future-self celebrated this holiday, I'd be laughing my ass off, shaking my head and screaming "No fucking way." But hey, for a middle-aged movie geek like me it's fun, and at least I don't wake up in a strange place with a twisting hangover and wondering if I should find a drug store on the way home to take care of that insatiable itch in my groin.

And if you think this sounds like a dull way to spend New Year's Eve, I'll have you know this old party animal might just liven things up this year by watching the remake, Poseidon, instead. In that one, midnight strikes exactly 14 minutes and 23 seconds into the movie, and it's Fergie who does the countdown (I'll bet she ain't visiting your house this year). Not only that, I wouldn't be subjected yet-again to Ms. Winters' gelatinous underpants.
Posted by D.M. Anderson at 8:17 PM