GERRY ANDERSON: A LIFE UNCHARTED: Eulogy for a Puppet Master 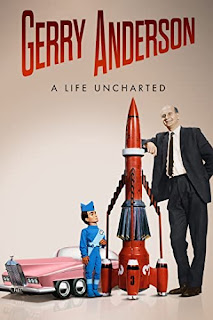 In England, producer Gerry Anderson is renowned for creating - along with wife Sylvia - a lot of sci-fi themed kids’ shows featuring puppets, Thunderbirds being the most successful. On this side of the pond, he’s probably best-known for the live-action ‘70s series, Space: 1999, which ran in syndication for a few years. In a way, he was the British Gene Roddenberry.

Some of his shows have since earned cult followings, but fans should be aware that the documentary, Gerry Anderson: A Life Uncharted, is accurately titled, focusing far more on the man’s private life than his prolific career. And to be honest, Anderson’s personal history isn’t as interesting as his professional one.

Through new and archival interviews, the film chronicles Anderson’s life, from being raised by combative parents through his death in 2012. Much of the story is told by Anderson himself or children from his three marriages, some who became estranged from their father, others, such as Jamie Anderson, who followed in his footsteps (in fact, Jamie is one of this film’s producers). Ultimately, it paints a picture of a man who wasn’t always easy to get along with and not entirely successful at long-term relationships (professionally or otherwise). Even his marriage to Sylvia is portrayed as somewhat contentious.

While the film does touch on Anderson’s long career, those segments are usually fleeting, mostly mentioning which shows were failures or successes. A few colleagues and peers are interviewed, but there’s almost nothing about the creative process, how shows were made or Anderson’s peculiar passion for puppetry. Even his biggest successes - Thunderbirds and Space: 1999 - are briefly-mentioned footnotes to this story. Though a few scenes from various shows are included, they’re mainly used as context to Anderson’s personal life.As such, Gerry Anderson: A Life Uncharted is more of a semi-affectionate eulogy than a career retrospective. There’s nothing wrong with that if one is aware going in. The film is watchable, but had Anderson’s quirky creativity been chronicled just as comprehensively, it could have been fascinating.