Hanging Around with DEATH KNOT 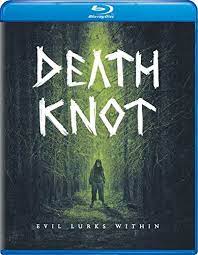 From Indonesia, Death Knot is a horror film dripping with atmosphere. From the opening shot - a woman performs some sort of ritualistic dance in the woods just before hanging herself - nearly every scene reflects the somber, foreboding tone. There’s even some beauty in its murky aesthetic. However, the story isn’t quite engaging enough to justify the film’s length and languid pace.

Hari (Cornelio Sunny, who also directs) and sister Eka (Wikida Sidmore) learn that their estranged mother has just committed suicide. Though they have no fond memories of her, both return to the village of their childhood and attend her funeral. Few of the villagers liked their mom much, either, because she supposedly practiced black magic. In fact, they blame her for resurrecting an ancient demon which has repeatedly prompted other locals to hang themselves in the woods.

It turns out the villagers might be right, and some practically beg Hari, Eka and her husband, Adi (Morgan Oey), to leave. When a few others hang themselves, the siblings are blamed. Adi wants nothing more than to get the hell out of there, but Hari feels obligated to stick around and find someone to look after their mother’s house until they can sell it. Naturally, Adi has the right idea, while we come to the consensus that Hari might be an idiot. After all, he decides to stick around even after witnessing someone close to him become possessed and hang himself.

Of course, if people high-tailed and ran whenever a killer, monster or demon fucked with them, there’d be no horror movies. So a character’s questionable decisions aren’t really a big deal. Besides, the basic story itself - while not particularly revelatory - is sporadically interesting, punctuated by some chilling scenes and haunting imagery. But Death Knot is often a little too meandering - and repetitive - for its own good, taking way too long to reach its predictable, underwhelming climax.

Still, the film looks great and features effective, understated performances by the entire cast. Death Knot should also be commended for eschewing cheap jump scares and special effects in favor of using its bleak setting and oppressive atmosphere to build tension. If only it moved along a little faster…