The Social Media Behind SINPHONY 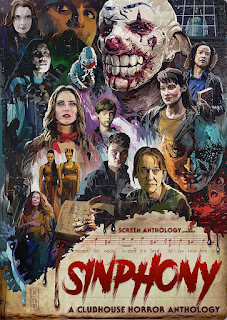 Call me old and out of touch, but prior to watching Sinphony, I’d never heard of ‘Clubhouse,’ a social media app where you can meet and chat. Doing a quick glance at the web page, I detected nothing to suggest anything remotely horror related. Perhaps there’s scary stuff floating around there somewhere, but I wasn’t compelled to dig any deeper by downloading the app. I’ll just stick with Facebook, thank you, where people my age feel more at home.

But Clubhouse is the brand name attached to the title of this horror anthology, which consists of nine tales by various directors, none of whom I’m familiar with. Like most anthology films - and we’ve been getting a lot of them lately - consistency is the main issue. But while none of these tenuously-connected stories hit it out of the park, a few show some creative spark.

The best segment, “Tabitha,” features a young woman who’s shot while committing a robbery and reaches out for help before she bleeds to death, a story which grows increasingly sinister and surreal. “Forever Young” is an amusing story of a middle-aged woman trying to recapture her youth and getting more than she bargained for. Elsewhere, there’s some poignancy and black comedy to be found in “Do Us Part?,” which has a young couple (temporarily?) separated by one of their deaths.

Some of the other stories are less engaging, either because they’re predictable, lack panache or fail to stick the landing. The worst of the lot are the two bookending tales, which unnecessarily try to establish a connecting thread throughout the film. Still, I wouldn’t go so far as to say any of them are truly terrible (even those featuring laughably clumsy special effects). Ultimately, Sinphony works about half the time, and for a low-budget anthology film, that’s a decent batting average.