MEN AT WORK: Remember These Guys? 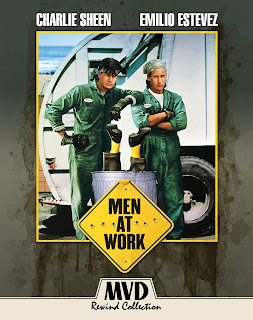 Released back when Charlie Sheen and Emilio Estevez briefly had some marquee value, Men at Work (written & directed by Estevez himself) isn’t a great film, but might be worth a few nostalgic warm fuzzies. In nothing else, we’re reminded that Sheen once had a film career before re-inventing himself as a walking punchline.

Leisurely plotted, slapdash and often meandering, Men at Work is the story of slacker garbage men Carl and James (Sheen & Estevez), who stumble upon the body of local politician Jack Berger, murdered by goons working for evil businessman Maxwell Potterdam (John Getz). Complicating matters is a tape containing evidence Potterdam has been illegally dumping toxic waste, which Berger planned to give to the police but is now in possession of one of his employees, Susan (Leslie Hope), who Carl’s been spying on because she lives in the apartment across the street from his.

Essentially a comedy of errors, the narrative is stuffed with numerous other story elements, subplots and peripheral characters, some sort of clever, others superfluous and inane. The result is a hit-or-miss film that’s occasionally amusing, though never laugh-out-loud funny. A lot of it coasts on the perceived charisma of its sibling co-stars, who deliver congenial performances. Keith David, however, steals every scene as a paranoid, unstable Vietnam vet. Conversely, Getz plays Potterdam like a cartoon character. Throw on a mustache and this guy could be Snidely Whiplash.Speaking of cartoons, everything culminates in a silly, slapstick climax that feels like it belongs in another movie. Until then, there are times when Estevez seems to be striving for a vibe similar to Repo Man - the best thing he was ever part of - though none of the dialogue, characters or situations he creates are as fresh or memorable. Still, both Charlie and Emilio have far worse movies on their resumes (lots of ‘em, actually). Men at Work hasn’t aged all that well, but does have its share of fans, who might enjoy this trip down memory lane.