THE GRANDMASTER OF KUNG FU: A No-Frills Fight Fest 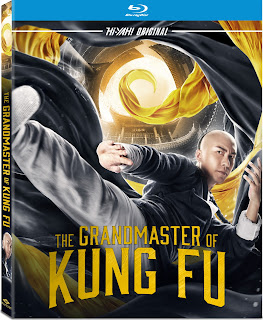 While nothing particularly original or noteworthy, The Grandmaster of Kung Fu is short, simple and wastes little time getting down to the business of martial arts mayhem. Sometimes that’s all you want from a movie.

In the early 1900s, Huo (Dennis To) is a humble, peace-loving porter who happens to have impeccable kung fu skills. When Japanese forces invade China, they threaten to shut down the kung fu school and replace it with their own martial arts academy. Huo is tasked to defend traditional Chinese kung fu customs by taking on Japanese general Takeda (Neomen Eerdeni) in a match to determine which country will rule the school (so to speak).

There ain’t much more plot than that. There are skirmishes here and there leading up to the climactic showdown, during which time the lines between good and evil are clearly drawn. Typical of movies like this, the Japanese are mostly sadistic and arrogant, the Chinese are noble traditionalists. Huo is a likable but unremarkable protagonist, while Takeda’s second-in-command is humorously hateful.

Of course, it’s the fighting that really matters, and as such, the film delivers several enjoyable set-pieces. There isn't a hell of a lot at stake - mostly national pride - and our investment in these characters is casual at-best, but the (mostly) non-lethal fight scenes are well-choreographed, bolstered by athletic performances from a cast with impressive skills.

At only 75 minutes, The Grandmaster of Kung Fu wastes little time with peripherals, quickly building up to a predictable-but-satisfying conclusion long before it has a chance to wear out its welcome. Occasionally, there’s something oddly cathartic about kicking back on the sofa, shutting-off the brain and taking in a no-frills fight-fest.